How can we continuously integrate new features when the PO only determines whether a feature is "done" at the end of each Sprint?

My team is having an issue with integrating software product features. Specifically, when do features get pull requested into our integration branch of code?

Currently our understanding is:

With the points above, it appears that pull requests for our "done" features or User Stories should occur at the end of our sprints. But how can this be the case?

If we merge several features together after we get the Product Owner's approval, it may be the case that the features conflict or break each other. Now the features are no longer "done", additional work to resolve conflicts must be done, etc.

How can we continuously integrate our new features (allowing us to do realistic integration testing) while retaining the fact that the Product Owner is the final say of whether or not a feature is "done"?

The team says the story is done. Think of this on a storyboard where the team marks the story as ready to pull (done or completed) into accepted status.

The Product Owner accepts the story, (by pulling it into accepted) but their acceptance only indicates the story is done in terms of business functionality.

So acceptance from a product owner, is only partial to saying the story is done. Done goes beyond PO acceptance because it encompasses the non-functional portions of finishing a story as well. QA, tech debt, etc.

One model for handling integration and done stories is to land these stories into a staging environment. Staging is a clone or close replica of your production environment. Its also where integrating teams would go to consume any code. Your Product Owner uses this environment to validate that the functional requirements of the story are met and accept the story. This doesn't need to happen during the review ceremony. It can happen anytime throughout the iteration, but ideally is completed soon after the iteration finishes (otherwise you hold your stage environment hostage and can't check in new features).

In order to get to staging, all your done criteria (functional and non-functional) must already be completed.

I'm simplifying a bit with this model as there are done criteria that can happen in production in some situations. But the majority of done criteria must be met by the time code goes to stage.

The DoD is usually a clear and concise list of requirements that a software Increment must adhere to for the team to call it complete. Until this list is satisfied, a product Increment is not done. During the Sprint Planning meeting, the Scrum Team develops or reconfirms its DoD, which enables the Development Team to know how much work to select for a given Sprint.

The key sentence there for me is that the Scrum Team (especially the Product Owner) develops and confirms the DoD. It is an agreed standard prior to the Sprint work commencing.

The Scrum Alliance have a handy chart for ensuring that the Definition of Done is simple, transparent and consistent. Please note the two boxes stating 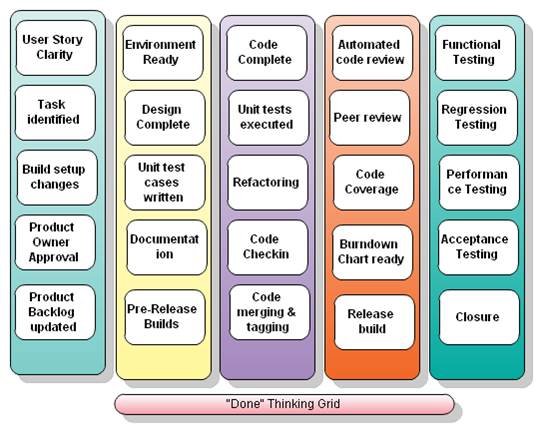 I know some in the community will respond with anger at my strict siding with the Product Owner but in my opinion it is absurd to think that the Developers are allowed to decide when to take work, what constitutes completion of that work and then force that work into the done column regardless of the Product Owner expectations.

The Product Owner manages the stakeholders, the business requirements and assumes the risk on behalf of the business entity. Of course, they absolutely must own the Definition of Done.

As a balancing act the Scrum Team own the Definition of Ready which allows them to reject User Stories from the Product Owner due to unclear specifications, technical problems, dependency work or any other valid concern.

Ultimately, if we allow Scrum Teams to mark their own homework and push products to a business without Product Owner due diligence the results could be terrible.

In addition, that does not scale to Scrum of Scrums otherwise each Scrum team would simply proclaim their dependency was 'Done' without a Product Owner to consider that they whole product was progressing.

As an aside I thought it would be helpful to illustrate how I control this issue as the Scrum Master.

Like all things Scrum (and Agile) a balance must be struck to ensure team harmony, trust and a high functioning team. I take the parts of Scrum I need to achieve that and adapt the rest.

Some might say I am not doing Scrum anymore but the truth is, I don't need the label, what I need is a highly productive Business Intelligence Centre.

Does it suit your needs to have the Product Owner reject User Stories? Be honest. If he/she is truly skilled and good at their role, their rejection of User Stories may be the best thing that happens to your delivery saving the team a higher amount of rework in the long run.

The main source of your conundrum is the Product Owner waiting until end of sprint to accept stories. The function of the Sprint Review is not for the Product Owner to review and accept the work of the Team. It is for the Team to review itself and present what was done to other stakeholders. Time for Product Owner review, feedback and iteration should be built into your sprint schedule.

With that in mind, let's answer your main question "when do features get pull requested into our integration branch of code?"

When to integrate can be a tricky decision. It's common to have a staging environment that serves as the environment both for integration and acceptance testing. But merging a feature can be hard to turn back from. If the Product Owner finds significant issues, now you have a potential blocker to pushing to production, and an untrustworthy branch for other features to branch from.

If possible, the Product Owner should review and approve each feature in isolation before it is merged with other features. Acceptance of the feature at this stage means that it has been realized as envisioned, although more work may be needed to make it shippable. Product Owner approval at this point should be the green light to proceed with completing the work of integrating and deploying the feature.

Here's one way integration and merge conflicts can be handled:

Your Scrum implementation has some misconceptions, which appear to be based around how to implement the "Definition of Done" in a properly-collaborative fashion. If you address this communications failure, your continuous integration efforts should become much smoother.

In addition, it will help your team a great deal to focus on the iterative nature of agile methodologies; agility stresses refinement of the product over time, rather than on perfect execution of "specifications" within each increment. The Product Backlog is a living document, and stories on the backlog are added, changed, or removed at least every iteration. It is not a one-pass set of requirements, and your team needs to leverage that flexibility.

When is Something Done?

In Scrum, a user story or increment is considered done when it has achieved its stated goal and met any existing criteria to which the Scrum Team as a whole (which includes the Product Owner) has previously agreed.

As a web-browsing customer,
I want to see everything on the page in 300-point type
so that I don't suffer from eye strain.

This story would be done when:

That's it. The story is now done. It may or may not be done right, but it's considered complete for the purposes of Scrum. The Product Owner should have been involved throughout the Sprint, so if the feature has completely slid off the rails, the PO's lack of involvement is likely the problem and should be addressed during the next Sprint Retrospective.

What About Stories That Aren't Done Right?

At the end of the Sprint, the team collects points for all stories that the whole team (including the Product Owner) agree were completed according to the Definition of Done. If the stories were thus completed, but are unsatisfactory in some way, that's grist for the mill during the Sprint Retrospective and for other inspect-and-adapt meetings. It doesn't change the fact that the stories were done in an agreed-upon way—an agreement to which the Product Owner was an active party—and so there's no "acceptance" of the stories to be done.

However, during the Sprint Review (my exposition in bold):

Then, during Backlog Refinement or Sprint Planning, the Product Owner can take any stories that were completed but didn't deliver the desired value and:

To sum up, the Product Owner doesn't get to single-handedly declare whether or not a story is done. After all, the "definition of done" is a collaboration between all the members of the Scrum Team.

This is a good question, which many teams struggle with.

The Product Owner makes his decision on whether a User Story is "done" at the end of sprint, during the Sprint Review Meeting.

So the whole Story lifecycle (To do - In progress - Done - Pushed to master) happens before the Sprint Review. And once Story is pushed to master branch, other branches should pull it in and fix conflicts if any.

User Story acceptance may take couple of days, so the Sprint Review meeting is not held to accept User Stories. It's held to compare planned vs actual and assess if the Sprint goal was met.

Not the answer you're looking for? Browse other questions tagged scrum software-development product-owner definition-of-done or ask your own question.

7
Does it make sense to reopen closed User Stories in a Scrum project
1
Breaking Down a Code Review of a Prototype
3
Agile Scrum Sprint Review (demo) and declined user stories
5
avoiding long running branches on big stories
10
Is it OK to defer implementation detail and consider user story to be done?
1
Story acceptance vs. ability to have potentially deliverable SW ready at sprint end
1
Technical product owner does it really exist?
3
Is a Product Owner's approval part of DoD?
0
Can each Product have its own P&L?
24
Which is better: large feature branches or merging frequently? Which is better small work items vs large work items?