Let's assume some software consists of 6 components where A, B, C are server side components and D, E, F are client-side components (different user interfaces). The dependency graph is as follows. This also describes the data flow. Data that is generated in A is processed in B and then can directly be used in F. Before D and E can use the data it needs to be processed in addition by C.

While a WBS also, to some extend, represents the dependencies I have problems transforming this scenario into an appropriate WBS. 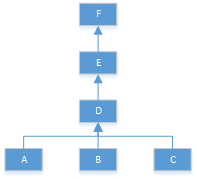 My first suggestion incorporates the fact that A, B and C can be done in parallel and D, E, F are placed in the order of their priorities.

The downside here is that, according to the WBS, changes in F can only be done after D, and E are finished. But as can be seen in the dependency graph, changes in F can be started right after A and B have finished. So this WBS leads to the impression that developers will have to wait until D and E are finished wich isn't true. So if there is a developer that could do the job now he could start it right away.

In my second suggestion F is uncoupled from D and E. D and E stay in the same order due to their priorities. Changes in F can now be started as soon as A and B are finished.

However, this is not a WBS. While this sample still seams to be fairly easy, real world projects tend to be much larger. So when uncoupling such changes in that way your not just loosing the WBS but also the understanding of the resulting graph.

How can this scenario be modeled in a better way?

What you are trying to visualise is a network plan, not a WBS. A WBS does not show dependencies, only the scope or deliverables and subdeliverables that needs to be realised in order to succesfully complete the project.

A network plan places all WBS-elements in their logical sequence in order to show the growing maturity of the project deliverable. So Suggestion 2 is the correct representation of the plan or strategy on how to realise the project. I would make it go from left to right (arrows pointing to the right), or from top to bottom, to make it more clear how to proceed.But that's just personal preference.

A network plan is usually created after you have completed the WBS (or scope).

The WBS on the other hand would be very simple:

Other elements to add might be Project management, implementation, testing ...all depending on the agreed scope.

11
Where to get general info on Work Breakdown Structure (WBS)?