Are there (IEEE) standards for project management

I was told by my project lead today, that he had received a certificate in project management and that he had written a project proposal according to some given rules but he wasn't really able to specify which rules in particular he followed. It seems to be called a project charter. But is this really a standard?

He suggested that a project couldn't be called a project, unless it was actually specified/defined like in the document that he handed over to me. It seemed to follow some template indeed, and the overall structure seemed nice.

But anyway, my questions are:

1) Does certificate actually exist in the field of project management. If yes what are they?

2) Is there any standards out there (maybe defined by IEEE) that would define what a project is (how it should be defined, etc.?).

3) Where could I learn about project definition and management. I am not interested in some sort of books written by people who feel they've been successful in running a project and want to share their recipes with others. I can do this on my own. I am more looking for "objective", more formal, standardised approaches to the problem.

There are several certificate bodies for traditional project management as well as bodies covering new project methodologies such as Agile and Lean.

As CodeGnome has mentioned, the two best know certifications are the PMP and PRINCE2. After this, Six Sigma has a big sway is highly structured companies, typically hardware/

PRINCE2 (an acronym for PRojects IN Controlled Environments) is a de facto process-based method for effective project management. Used extensively by the UK Government, PRINCE2 is also widely recognised and used in the private sector, both in the UK and internationally.

Six Sigma is a disciplined, data-driven approach and methodology for eliminating defects (driving toward six standard deviations between the mean and the nearest specification limit) in any process – from manufacturing to transactional and from product to service.

Now all of this said, with the exception of some parts of Six Sigma, there is no "one right way". For example the PMI PMBoK is called a body of knowledge and specifically does not claim to be a methodology. It's a framework of tools that a company or program team use to create their methodology. There are dozens of ways to manage chartering, requirements gathering and reporting. The good PM certification programs don't try and prescribe, they try and guide.

In the Agile/ Lean Space the leading certifications are CSM, CSPO, CSP (a progression) and PMI-ACP. Again, these guide, not dictate.

There is the IEEE Standard IEEE/ISO/IEC 16326-2009 which seems to lean heavily on the PMP. See this PDF for a table of contents. Chapter 5 TOC shown below. 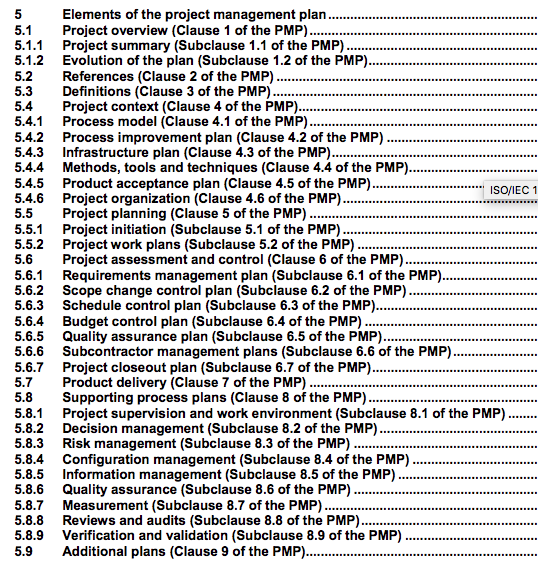 Not the answer you're looking for? Browse other questions tagged project-charter or ask your own question.

14
What is the difference between Vision and Scope Document and a Project Charter?
10
Project charter diagrams
1
Can Letter of Award (LOA) or Service Order be considered as a Project Charter?
2
How can one apply a method of management to a project that was initiated without one?
3
How to create an astounding innovative project plan when the information is too broad and there is short time to do it
1
Work statistics report for resources
1
How can I find project charter resources?
1
How to define Budget in Project Charter when Cost is unknown?
1
How to write a very specific objective for a project?