What problems can be diagnosed from a Scrum Cumulative Flow Burnup?

Useful charts for a Kanban system shows how to read a Kanban cumulative flow chart. I am wondering what patterns stand out on a Scrum cumulative flow burnup? I've seen two patterns frequently: the hockey stick and the bottleneck. What other problem behavior can show up in a flow burnup, and what can be done to correct it? Also, what intermediate states may be fruitfully charted other than In Development and In Testing? 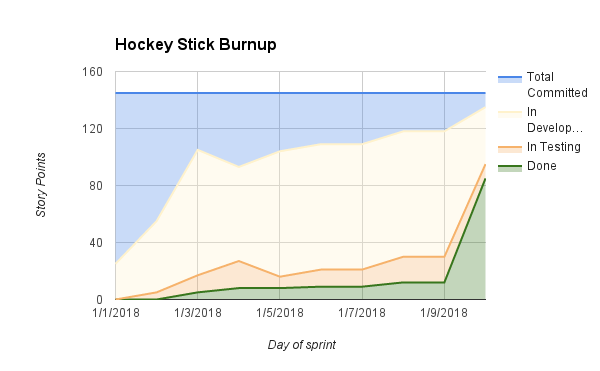 This example uses mock data; see How can we avoid finishing all stories on the last day of a sprint? for a real-life example and some great discussion. 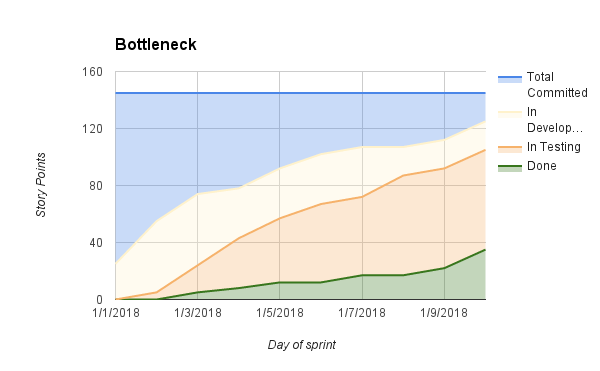 See Best strategies for dealing with integration testing bottlenecks? and How to better balance resources in a cross-functional agile team? for some discussion relative to bottlenecks.

I am wondering what patterns stand out on a Scrum cumulative flow burnup?

This graph may help you read your CFDs (source): 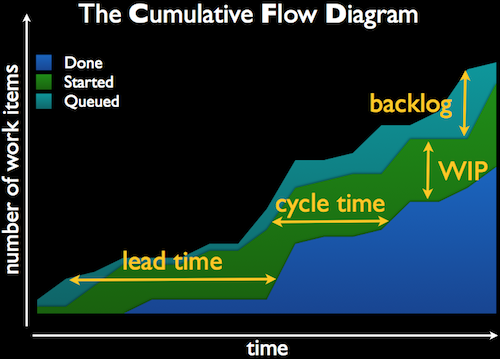 What other problem behavior can show up in a flow burnup, and what can be done to correct it?

Limit the work in progress in development. Testing might be a bottleneck, so try not to overload testing. Either limit work in development, or increase testing (hire, convert etc.)

Also, what intermediate states may be fruitfully charted other than In Development and In Testing?

I think that enough for a starter CFD, because you see all your problems. As an additional metric, I recommend to check lead time (how much time does it takes to get something from the first keystroke to production).

The 'hockey stick' is a very common problem. I call it the 'cliff edge' when using a burndown chart.

The other states that you might consider including in the chart will depend on the way you do your development. Some states I have seen used are:

Sprint has a very common trap, that leads directly two both of these chart types. The trap is lack of Work in Progress limits.

Day 1 of a two week Sprint and there are five developers on the team. Each developer picks up 1 story, so WIP is 5 on day one. Say it takes an average of 5 days to complete the work on a user story. This means on day six of the 10 day sprint 5 stories complete and go to testing. QA, which is only two people, is slammed with a bunch of work.

To add to this, most likely the developers are not doing Test or Behavior Driven Development and as soon as they finish their first story they go grab another one. So even if QA finishes testing, two things usually happen. 1- They find bugs that have to go back to the Devs and 2- There are more stories to be tested which come in on the last day of the sprint.

By implementing WIP limits (and I also recommend aggressive story slicing, to make stories as small as possible) you force developers to work on fewer stories (story swarming).

With a two week sprint, you want a total cycle time of 2-3 days from start to "done". WIP limits, smaller stories, up front testing (TDD, BDD) will help you do this and will tackle both of those scary Cumulative Flow Diagrams.

19
How to better balance resources in a cross-functional agile team?
15
How can we avoid finishing all stories on the last day of a sprint?
16
Useful charts for a Kanban system
1
Best strategies for dealing with integration testing bottlenecks?

14
Can Scrum Sprint duration change from 4 weeks to 2 weeks during the project?
9
Agile and Scrum:- approaches, problems, common mistakes and lessons learned
3
How can these problems with agile be solved?
2
What team tasks can the Scrum Master help with?
4
What can I constructively say when looking at the Sprint Burndown
0
Issues with team, management and clients to run a proper scrum team
1
Burn Down Chart : What is the definition of work done in Scrum
16
What can a Scrum Master do in a team that has mastered scrum?
7
What can the team do to prevent stories from completing until the last day of the sprint?