How much automated test coverage should I aim for in an agile project?

I have generally used manual testing in my projects. In the proposal plan, I am going to introduce automated testing this time.

Few things I am going to add:

For Integration and System Testing, how much automation I can do? My project is a web project. JSP->Spring->Hibernate->Oracle

It seems there are some tools like FitNesse which are useful for agile purposes.

As per my understanding, for screen capture, we should not be using automation as screen often changes but other areas can be fully automated even if there are additions in each sprint by tools like FitNesse.

You should definitely not try to write "as much automation as possible" or fall into the common trap of thinking that 100% automation is best and should be aimed for.

So, what should you test through automation? Here are some things to consider

I'd suggest tests are structured along the above lines, in that way when one fails people know why it was created. If it is the test that is wrong and not the code under test they should understand why it's important to fix the test rather than delete it.

You can obviously adapt the above as you learn more and make decisions as to what code is worth writing tests for.

You should aim for as much automation as possible. Automated tests finish faster than manual tests, and therefore you can significantly reduce idle time; when you are waiting for test results. Of course, it matters what kind of tests you automate and how much you write of the kinds; we call this approach the test pyramid: 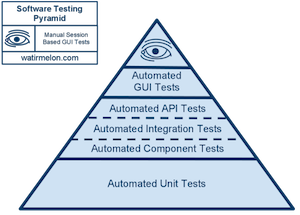 The width of a layer tells you the amount of [automated] tests you ought to write.

You should put your GUI related tests to the top and it is worth the effort. Screen capture and comparison is very useful, until you don't write more than 10 tests for them (2 for each browser). Automate this one, too.

You handle the system as a black box, and you different scenarios manually until you find a new test case. When you have found it, you write a test case on the proper layer in the test pyramid. Not all tests should be on the GUI level despite the fact that you found it there. For example, you don't need a GUI test for a specific error case if you can test reproduce and test it on the unit test level.

You should forget about FitNesse. Cucumber is a way better alternative. I wrote a nice tutorial about it a while back.

For about cruise control, too.

The trick is to find the right balance for your team. There are two approaches you might want to consider:

The first approach is to analyse your past bugs and try and target your automated tests at the components and functionality that fails the most often. This approach can provide the maximum benefit for the smallest investment of time and effort.

Another approach is to work with the stakeholders to determine which functionality is most important in the product. Add your automated coverage starting fom the most important feature and working your way down the list. I have worked with some teams where they submit the list of automated tests to the Product Owner for approval. The Product Owners may then say something like "that's great, the functionality you are covering is all the important features of the applications. Problems elsewhere we can live with if necessary".

One piece of advice for web based automated testing is to make your tests as independent as possible from the page layout. For example you can use IDs to identify the elements on the page and these IDs can remain constant even if the layout changes.

FitNesse is a good tool as it allows for a lot of exploratory testing by testers or non-technical stakeholders. The idea with FitNesse is to separate the testing code from the test scenarios. As an example, say your team was working on a calculator application. The developer would write some code for adding together two numbers. They would also write a FitNesse 'test fixture' which passed numbers to the adding code and returned the answer. FitNesse then provides an interface for the tester (or even business users) to pass data to the test. So the tester might pass 2 + 2 and expect an answer of 4. One benefit of this approach is that the testers can focus on test scenarios and not worry about how to write the automated tests.

Cucumber is a tool that is used to do Behaviour Driven Development (BDD). With Cucumber you tie your requirements closely to your tests. Cucumber allows the team to write the requirements using business friendly language. Then Cucumber provides the hooks between these requirements and testing code. Using the calculator example again, you could write a scenario in Cucumber like "given I have two numbers (5, 7) when I add those numbers together then I will get a sum of 12". Cucumber would then link this scenario to an empty code method. It would be up to the developers/testers to write the code that made the test work.

You can see how these kinds of testing tools give you a neat way to integrate automated tests in to your work. But take note they don't actually include the test automation itself. I would suggest you try them out and see which ones your team finds to be useful.

13
Should small teams use Continuous Integration?

20
What is the role of a QA tester on a Scrum team?
0
How Test Driven Development can pretend to be Agile?
10
How much code documentation should an effective Scrum Team produce?
3
How much detail should the solution design have in Foundations in DSDM?
0
Agile Project Plan
4
In an scaled Scrum with multiple teams, who should be responsible for writing automated system tests?
5
Are there differences in Test plans for an agile model and a traditional model?
0
How much volatility should be acceptable among Scrum teams?
0
How should I account for automated steps in Kanban board?