Is my sprint break down good enough to start with?

In the previous question, plan of release was discussed -

If I further break down a sprint, it would look like this:

What you are implementing is a mini-waterfalls approach where you have multiple small waterfall development efforts. If that is how you want to run your team then I'm not going to tell you it's wrong. But, this is not Scrum. If you want to run a Scrum process you should be looking to deliver completed enhancements throughout each sprint.

Comparison of mini-waterfall vs. Scrum

This section will try to answer some of the follow-on questions from the comments sections.

In a mini waterfall the first few days may be spent by the devs working out how they are going to build something (design) and ultimately building that thing. They may work together or separately on their enhancements. During this time the testers are likely writing the test cases for the work the developers are doing. Once the development work is done, the testers can start testing it. Hopefully there is enough time left for them to do all the testing they want and development didn't overrun. Developers can now spend their time fixing previously logged bugs, which the testers can then confirm are fixed. As bugs come in from the testers on the new enhancements the developers fix those. Again, hopefully the testers don't find so many issues there isn't time to fix them during the sprint. If something is found to be seriously broken and needs to be rewritten (maybe the original design misunderstood the problem) you need to squeeze in another dev-test cycle in the time remaining.

With a Scrum approach, on day one you still do some planning of how work will be done. This should include devs and testers. Testers can highlight things they would look to test for to make sure developers consider those things in their plans. This can also allow the testers to identify small chunks which the developers can deliver to them early for testing. Any test cases needing to be written should be included in the plan for that story. After this is complete the team gets together to work out what pieces of work they will all pick up first. This is repeated each day in the 'daily scrum' meeting. The team will usually not work as individuals on their own enhancements, where possible two or more developers will split up an enhancement to work on in parallel. If all the developers suggested they were about to start work on things which would take them 3 days before there was anything worth testing, the testers should speak up that they need something to do. Possibly some of the quicker bugs to fix need a lot of testing, let's get those fixed first to keep the testers busy while we work on something bigger.

Hopefully this allows a more efficient use of the teams time. I think the situations where the test cases take exactly as long to write as the code are rare. By splitting the work up and allowing the team to decide on a daily basis what they work on they can optimise the use of their time and work together to achieve the sprint goal. The benefits of working like this are many, too many to go into here.

Here’s how traditional test phases typically fit in with an agile testing approach: 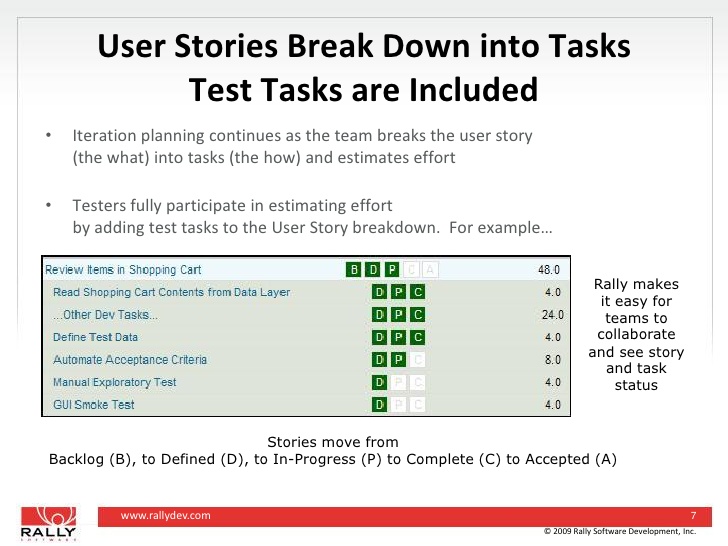 Looks good to me. You can do a retrospective on this process after a couple weeks, and see where you can improve it.

Probably not. It would appear that you're doing some kind of weird "Scrummerfall" with command-and-control assignments and time-based release planning. This isn't Scrum, it isn't agile, and the comments lead one to believe that agile may simply be the wrong methodology for your team because the team and its leadership currently lack the experience or coaching required to implement successful agile iterations right now.

An agile framework might be a viable choice in the future as the team learns more about agility, but trying to bolt agility onto your current project is unlikely to be a successful project-delivery strategy. Your mileage may of course vary.

Each agile iteration is a "project in miniature." Each sprint should pull in just enough stories to fill its projected team capacity. The team should then take collective ownership of the stories during the sprint, do just enough planning to address the current Sprint Goal, and work cooperatively to complete each story.

While there are exceptions (generally based on team composition and skill set), agile stories should typically be worked on cooperatively by the entire team, not serialized within the sprint and certainly never serialized over multiple sprints.

While Scrum doesn't mandate this, in effective agile implementations your testers and programmers should be working interactively throughout the sprint to implement test-driven design and continuous integration. Planning "testing sprints" is usually a project smell.

34
How do you schedule delivery dates in Scrum?
0
Agile Project Plan

0
Agile Project Plan
0
How to organise manual testing in a scrum team?
4
How can we deal with a big story that does not break down?
6
Better approach to sprint for QA and Dev team
1
Can I break a user story down after work as already started?
5
Scrum - splitting test from a user story to next sprint
3
How to break down a product or organization in feature teams
7
Can I break down a vertical story into horizontal tasks?
2
How to split or manage a PBI/User Story in multiple sprints for different task types
2
How to break jobs down into subtasks in projects (i.e. an Angular-Node.JS application)?