UML Class Diagram for the sprints 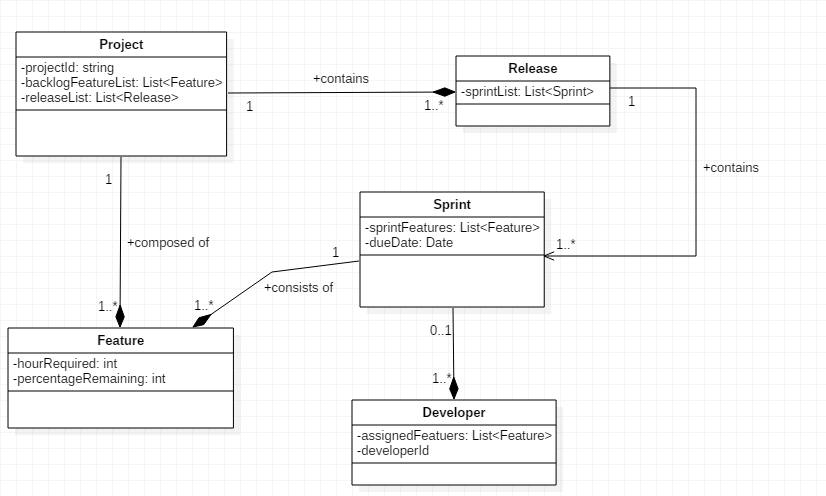 This is interesting and I would say that it is an excellent start! I see this exercise that you are doing to be valuable and potentially an excellent way to describe scrum to developers. Since you are talking about Sprints, I am guessing you are using scrum, if that assumption is wrong please let me know. Here are some points that might help you improve the UML Diagram:

This is a fun looking and also useful project. Please share the final result with us when you are done!

While I think this is a really cool exercise, I think it may be doomed to be perpetually inaccurate. Of course, I'm not an expert in UML, so I'll explain why and you can see if that helps.

For the work to do, you would have a project, which is made of releases. After this the exact names change a lot depending on your tool but each release probably has some epics which are composed of user stories. The backlog is an abstraction for presenting the work-to-do set of objects to those doing the work. I'm going to set aside scaling frameworks for a moment and just talk about Scrum, so that "do-the-work" diagram would have a team, which has members including a Scrum Master, Product Owner, and a group called the development or delivery team which has members of its own which may or may not be developers (obviously if it's software, some almost certainly are).

The backlog really presents the whole of the work-to-do set of objects, but it's important to understand that it connects at the team level, not at the developer level. Scrum allows the team to determine its own internal strategy for completing the work.

As I said, I don't know if this is possible to represent in UML.

Not the answer you're looking for? Browse other questions tagged sprint project-management-style or ask your own question.

12
Scrum Project Management Methodology strategy for working towards a fixed deadline
8
Client with conservative UAT policy
8
Can I build a strong career as a project manager without in depth technical knowledge?
1
Project Management without access to budget or deadlines
5
How to manage large-scale research projects in a research center and measure performance?
3
Team consistently not making sprints
2
From a project planning perspective, is it wrong to have one sprint for the API and another sprint for the UI?
0
Template for projects