Can Scrum be used to schedule family chores?

I have a 6 year old and 8 year old child. I would like to implement Scrum in my family to make getting chores done more efficient. Can Scrum be implemented in this context?

Just do it? doing is the best example.

I see no reason why children couldn't follow a plan like this. No need to explain just execute! :)

At its core, Agile does the same thing you and I do when faced with too much to do and not enough time.

One note of warning, iterative household tasks is not for everyone. I know one of my Agile trainers who's girlfriend really hated it. They are separated now...

I've been using Kanban for Family chores for about a year now. Scrum had too much overhead for simple chores and none of the chores required a any degree of planning or collaboration, so Kanban seemed the best choice.

My kids are 9 & 11 and they really took to it at first, because of the novelty. Then it all fell apart when they realized the "story points" would only convert to $0.20 per point of allowance, they revolted, unionized, and came back with a counter offer of $0.40 per point. Since then, its worked quite well and I am paying them an weekly allowance of about their age ($9 or $11 / wk)

There is a list of pre-established tasks with points (color corresponds to point value). Parent moves something from To Do to Asked. Kid moves it from Asked to Taken/Doing and then Done. Kid can also move from To Do to Doing and Done without being asked. Parent moves from Done to Accepted and gives the Kid a tally of points (red post it), which at the end of the week gets calculated into to allowance they will receive.

One swim lane for each kid.

Kids like it because it is empowering for them to choose tasks and understand the value of those tasks relative to others. It took a while to establish the habits to understand what constituted Accepted, so there was a fair amount of re-work. But now that we are in the swing of it it moves well, except after grandma sends a $20 in the mail, they feel cash rich and velocity sags. :) 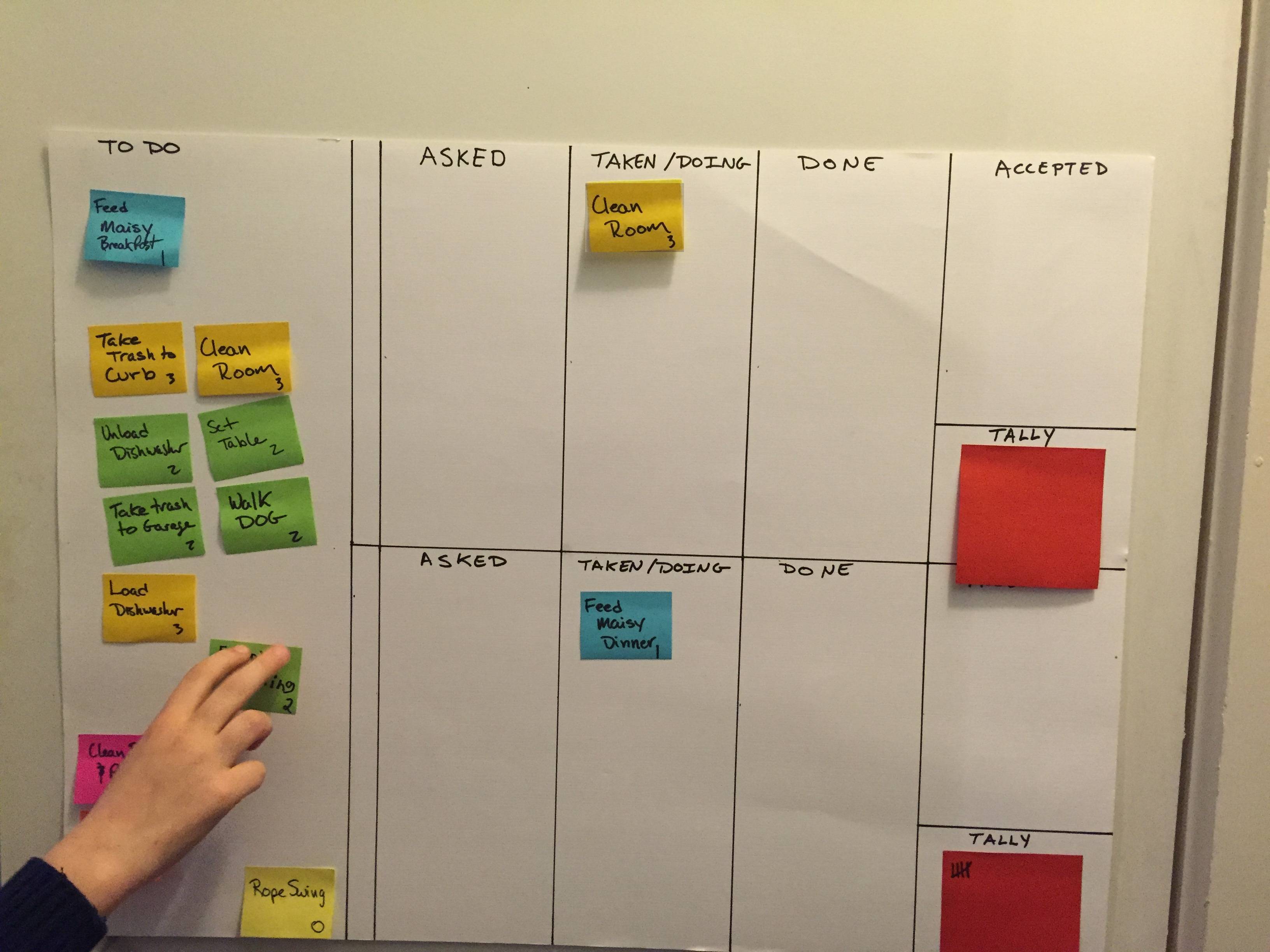 Not the answer you're looking for? Browse other questions tagged scrum frameworks recurring-tasks or ask your own question.

3
Analysis document in Scrum
5
Are efforts to improve quality an impediment to achieving schedule in Scrum?
4
How should we balance chores to reduce technical debt with impending deadlines for features?
2
Can Scrum be used in non-development activities?
0
pivotal tracker chore: Should chores be estimated or not?
1
Schedule for a 10 day Sprint in Scrum
4
Implementing Scrum when everyone is remote and part-time
2
Requirements traceability in agile?
4
Agile team (scrum) with a doubled backlog