How to visualize and manage task dependencies?

I often have the need to achieve a specified goal (e.g. deliver a piece of software functionality). At the start of the work I identify the goal and can list some tasks needed to bring about the desired outcome. For each of the identified tasks, I may be able to break these down into sub tasks. Usually though, tasks (at different levels of detail) needed to be undertaken to achieve the goal are discovered as work progresses. So for example, some research (a task in itself) may be needed to determine the best approach for a particular part of the work before the actual work tasks can be identified.

In the most basic form, I can represent the hierarchy of composed tasks using, say, an indented list, though there are difficulties in also representing arbitrary ordering constraints. Alternatively, I can use Microsoft Project to show the task hierarchy and the ordering of tasks.

However, both of these approaches are quite 'listy'. I was wondering what methods exist that would allow me to represent the tasks and their relationships on a diagram, perhaps with nodes shown as tasks, and relationships (e.g. composition, ordering) shown as lines.

Respect the time box, and do "just-in-time planning." Don't do so much up-front decomposition, and rely instead on iterative delivery to provide you with an emergent design.

From an agile planning viewpoint, you're doing something fundamentally wrong if your backlog requires complex dependency graphing. In particular, you're either:

If you're the project manager, you need to refine your methodology. Specifically, you should rework your product backlog so that you aren't trying to do so much up-front decomposition that your entire backlog is filled with tasks.

Ideally, your backlog will be filled with cohesive epics and themes, with only work for the next few iterations decomposed into relatively independent user stories. The user stories should follow the INVEST mnemonic, so that you don't have a complex dependency graph to deal with.

You should only be defining tasks for the current iteration. While tasks can certainly have dependencies, a feature that has been properly scoped for a single iteration should not have so many tasks that a complex dependency graph is necessary.

There are lots of methodologies for dependency graphing. One of the more useful ones in the software development space is the Mikado Method. It helps the team or developer work backwards from the goal to the current state, identifying dependencies and refactorings through a directed graph. Ultimately, though, the graph is a means to an end, and not a goal in itself.

If you aren't doing software, other techniques may help you resolve dependencies and order your graph. Entire books are filled with the theory and practice of how to generate such graphs, so an exhaustive list would be out of scope.

In agile methodologies, though, the work scheduled for the iteration rarely needs the level of graphing you seem to be asking for. While it's very useful for defining the critical path on refactorings, unscheduled work is too high-level to create such a graph, while scheduled work should be too obvious to need one.

You could pretty much build it by integrating Excel / MS Project, SharePoint, and PowerPoint. Though it is painful to build, it's worth it as it could be customized as per your requirement.

However, it appears that there is one such tool that could bring a visual effect for the task management.

There are two classical approaches to visualize requirements/tasks and their dependencies.

I am pretty sure you will find some tools for you favorite technique.

within my remote Scrum application I have integrated very simple assessments - for the ProductBacklogItems as well as for the tasks: A) the risk is a combination of: 1.) complexity: value[1,2,3] 2.) innovation: value[1,2,3] B) dependencies are in both directions: 1.) how much do others depend on this task: value[1,2,3] 2.) how much does this task depend on others: value[1,2,3] ... plus: in case you do have higher values given (one 3 or two 2s): add some text into the textarea how you want to handle this...

you can visualize this with a 9x9 grid and make the colors green-yellow-red (like a traffic light).

I made the application (the CYBR-SUITE (CYSU) remote Scrum solution) available via Sourceforge at the moment: https://sourceforge.net/projects/cybr/

It's running on docker via docker-compose - "all" you need is a VPS with 2GB RAM and a Linux kernel (plus docker & docker-compose, of course.. check the README.md for a step-by-step installation ..)

Img below is a screenshot showing the ProductBacklogItem's assessment/evaluation - but it's very much the same for the tasks.. 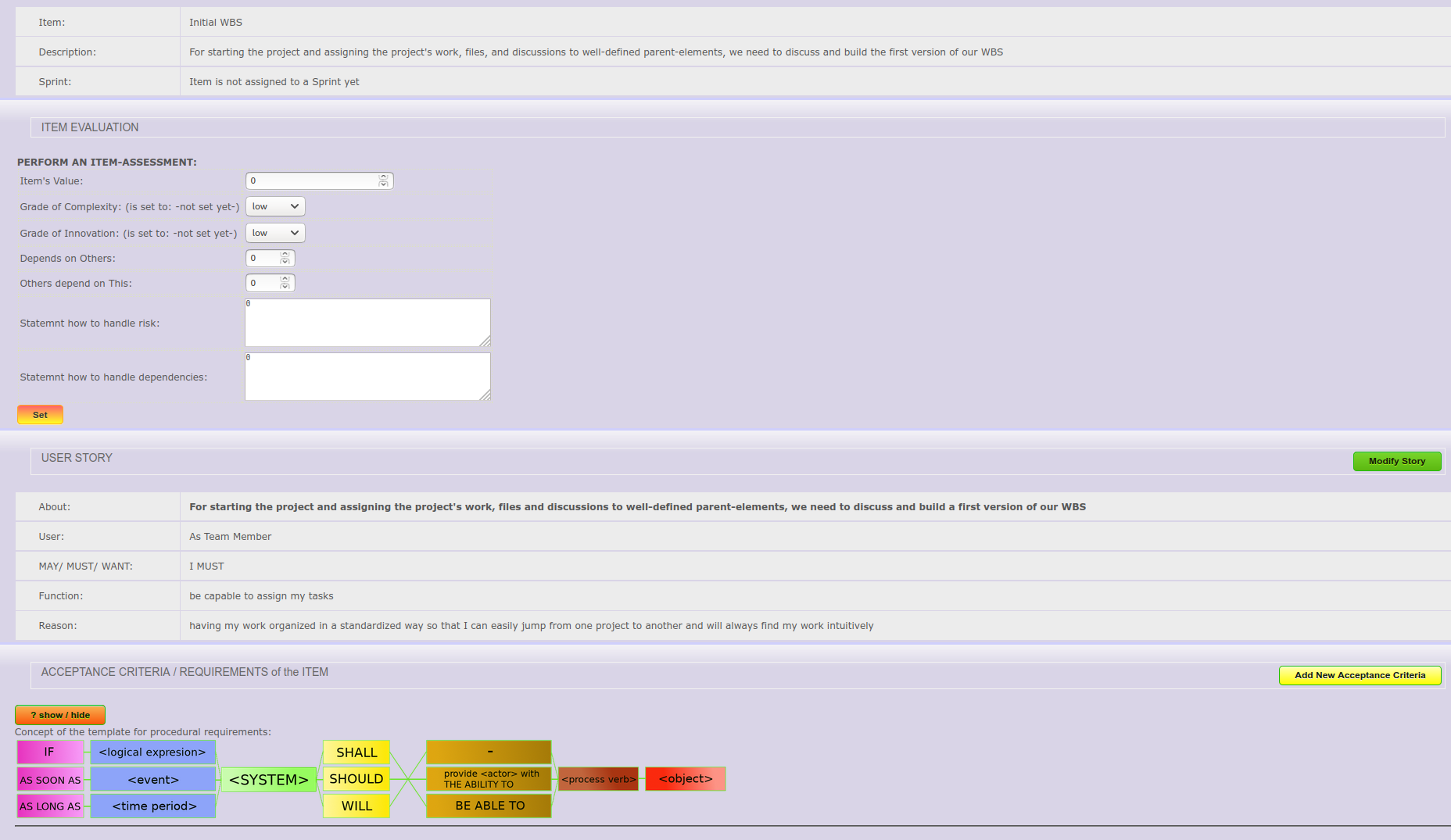 I just gotta say this: "Microsoft Project®" is king of that hill – and for very good reasons." It is excellent at managing inter-task dependencies. The product was born out of a set of Microsoft Excel macros that Microsoft Corporation was using for its own purposes ... and, it shows. I've never found any software product in the open-source world that came anywhere close to it. Buy a copy and learn it very well.

Not the answer you're looking for? Browse other questions tagged agile planning tasks task-management or ask your own question.

3
Perf.A(task X) >> Perf.B(task X), and Perf.A(task Y) > Perf.B(task Y) - whom do you assign?
5
How do “action items” relate to various task identification and tracking methods used by agile methodologies?
2
Immediately assign tasks to everyone or task by task?
1
How to make personal tasks in Asana reflect general project task priorities
2
How to split or manage a PBI/User Story in multiple sprints for different task types
1
How does “Visualize the workflow” in Kanban differ from “Monitor, measure and optimize workflow/Manage flow”?
1
Task states besides “complete” and “incomplete” in TaskJuggler?
1
Can I link or have formulas between task times?