How to track identical Agile/Scrum PBIs for multiple platforms not in sync?

Our company uses Agile/Scrum as our development methodology, with Microsoft's VSTS (Visual Studio Team Services) being our tool of choice.

We have several teams, including Android, IOS/iPhone, and backend/server teams, all working on our company's flagship product. For historical reasons, the IOS product lags behind the Android product feature-wise, and the IOS team works hard to "catch up" and bring their product up-to-date.

How does the Agile/Scrum process work for us?

As the Product Owner, I typically author a new PBI ("P") for a feature we want to implement in an upcoming sprint.

Because the iPhone team needs to catch up on older feature still unimplemented in the product, they frequently do not have the time during the sprint to implement their tasks in PBI "P". Alternatively, the state of the IOS product precludes their working on PBI "P" because some other functionality is not yet implemented.

In other words, there is an unrealistic coupling of the two teams together through a common PBI.

At the end of the sprint I have a dilemma: the IOS team's inability to complete their tasks together with the Android team prevents me from marking the PBI as "done". I have the unenviable choice of:

I've come to the conclusion that the only solution to tracking the Android and IOS teams without running into the problems mentioned above is to split (or clone) the PBI into two PBIs: one for tracking Android, the other for IOS. Whatever the solution is, it should support a single source of requirements and encourage details reuse.

Possible Methods for Splitting the PBI (none are satisfactory)

There are two methods I can think of for implementing splitting a PBI by platform.

First Method: Make two copies of the PBI, one each for Android and IOS

In this method, the Product Owner authors the PBI, complete with a full description of the user story, to be used to track the Android team. Once completed, an identical PBI is created for tracking the IOS team.

The obvious drawback here is data redundancy: If the user story is updated in one, it must be updated in the other. In addition, any discussion thread that grows in one PBI might not be seen by the other team working on theirs.

My idea is for the Product Owner to write his/her user stories in a 'feature' rather than in a PBI. This 'feature' will contain the entire user story in a platform-agnostic fashion. This feature should not deal at all with anything platform-specific.

This 'feature' will contain within (below) it two platform-specific PBIs for Android and IOS, as the following diagram illustrates: 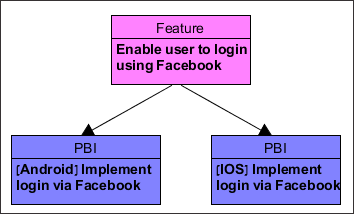 The advantages here are that any changes to the original user story will be made in the feature, not within a PBI. In this way, both platforms have only to look at their parent to see the latest-and-greatest user story.

Any platform-specific comments or additions to the user story should be made in the PBI.

In the even that a PBI does not need to be implemented by different platforms (e.g., it is a PBI for the backend/server group) the user story can be written in a PBI, without making use of a feature.

Does it violate the Agile/Scrum methodology in any way?

There is no Agile(tm) methodology. There is an agile philosophy, described in the Manifesto for Agile Software Development, based on several frameworks and methodologies such as Scrum. The first value of the Manifesto for Agile Software Development is "Individuals and interactions over processes and tools" which encourages conversations. As a framework, Scrum does not highly prescribe how one represents or executes the work to be done; see the section on Artifacts, especially the Product Backlog and Sprint Backlog.

Is this scheme an acceptable one?

Based on those definitions and understanding, the answer is that it could be. It is acceptable by the values and principles of the agile philosophy, and the rules of the Scrum framework. More importantly, as a self-organizing team, experiments to discover effective and efficient ways of working are important.

Does anyone have an alternative solution to track a PBI across multiple platforms without major disadvantages?

Perhaps you are asking the wrong question. Perhaps it would make sense to treat the various platforms as separate products. Perhaps something a solution to re-synchronize the teams; not forgetting about The Mythical Man-Month, as slowing the other team may be an option. "Simplicity--the art of maximizing the amount of work not done--is essential."

Discuss the problem, including the value that finding a solution can provide, with the people/teams involved. Don't allow tools to limit the possibilities.

Not the answer you're looking for? Browse other questions tagged scrum agile or ask your own question.

8
Kanban for multiple projects
2
How to structure a scrum team to build native iOS and Android mobile app that needs backend development?
16
When developing the same app for multiple platforms how do you keep the implementation aligned
1
When to consider multiple PBIs when determining the HOW?
0
Shared backend resources for two mobile SCRUM teams, iOS and Android
6
Handle the same project over multiple platforms in Agile
2
How to make an Agile team comprised of 4 platforms work?
0
Product backlog/s definition
2
How to split or manage a PBI/User Story in multiple sprints for different task types
1
Correct Work Item Hierarchy in Azure Dev Ops