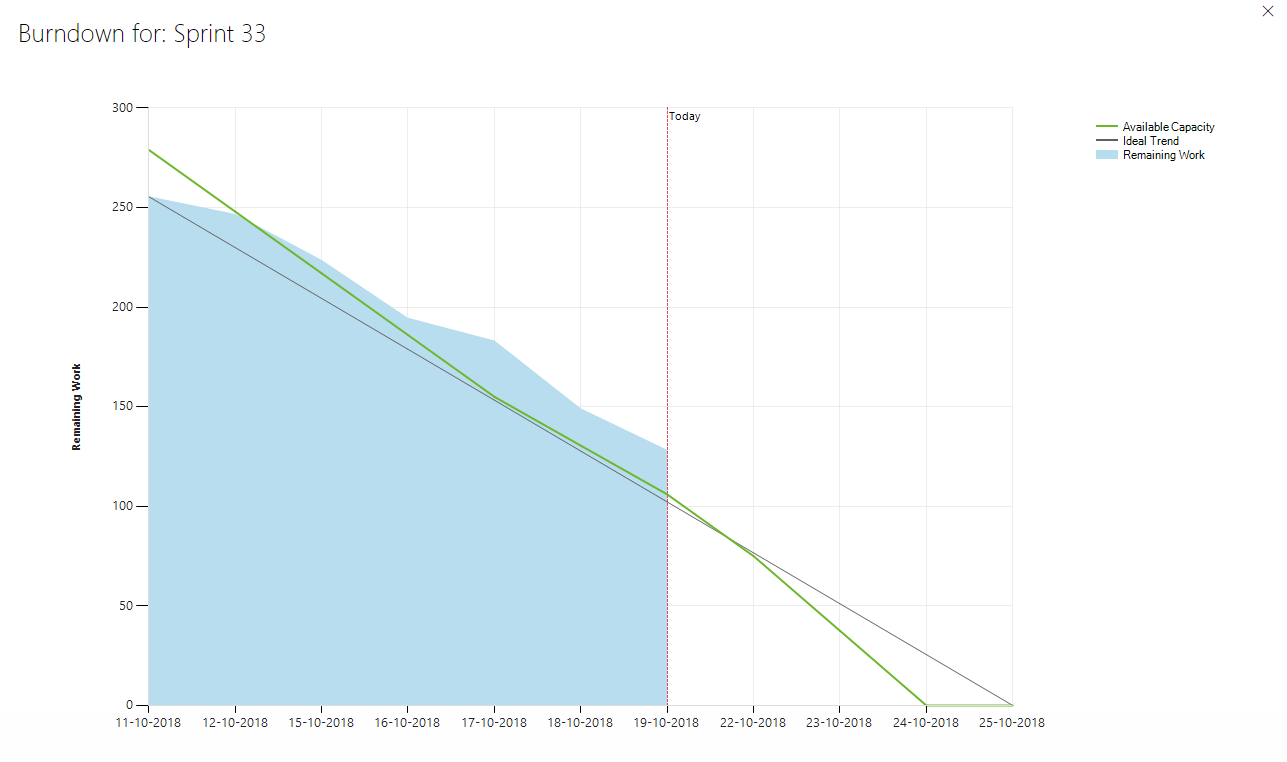 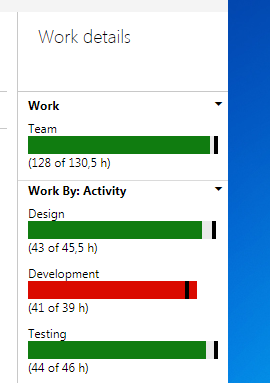 I'm not sure where this data is coming from, so this is only an educated guess. However, it looks like your burn-down is correctly showing that you have more development work than originally planned. Depending on your system, this can happen if:

In this case, it looks like the latter. Your team estimated 39 hours for "development" (whatever that means to them), but has expended 41 hours on those activities so far.

First of all, this may or may not be a problem. If your implementation provides sufficient slack to handle minor perturbations, then a few hours one way or another won't really matter. However, if enough work is being added that the Sprint Goal is in jeopardy, or if the projection shows that essential work will no longer fit within the current iteration, then a discussion with the team (including the Product Owner) should take place as soon as possible.

You might also consider that tracking task time consumed may be an anti-pattern, especially if it's not yielding useful information for your team. A related answer discusses the use of Trello to track story points consumed, which looks quite similar to your current time-based approach. Another answer provides a different take on why time-based tracking may be a poor measure of work remaining, and some options for addressing that.

In any case, remember that your goal in Scrum is not to make pretty graphs that follow an ideal trendline. The burn-down chart is an information-gathering and information-radiating tool, not a core deliverable. Instead, the team should use the burn-down data as a means to surface unexpected impediments within the current process, and as a conversation-starter for the whole team (including developers, Scrum Master, and Product Owner) to communicate more effectively with each other about what's really going on within the Sprint.

If I'm correct, you can interpret the figures as follows.

From the chart: At the end of today there will be a little over 100h of capacity remaining. Right now there is somewhere between 120-130h of work to be done.

either way there isn't a whole lot of slack...

While looking at the graph I noticed that the sprint lasts longer than you have capacity available. Are the values for sprint length and capacity set correctly?

Not the answer you're looking for? Browse other questions tagged scrum pm-software burndown-chart devops or ask your own question.

8
Sprint Burndown chart and tasks estimation in time
8
What are “Consumed Story Points” in Trello?

6
How does the TFS 2012 burndown work for tasks created and worked on in the same day?
4
Opaque burndown charts and story validation
8
Sprint Burndown chart and tasks estimation in time
2
Are Tasks and updating remaining hours for Tasks essential for Scrum
0
DevOps and support organization
6
Is there a way to search Project tags in Azure DevOps
4
Azure Board (DevOps) Reports
2
How can the Backlog Item's Effort field be auto calculated in Azure DevOps?
1
Burndown Chart Ideal/Projection
2
Multiple Assignees to Azure DevOps task