What's difference between “depends on” and “is blocked by” relations between issues in Jira next-gen board?

In Jira, (probably) in next-gen board, when specifying relationship between two issues, I have the following choices: 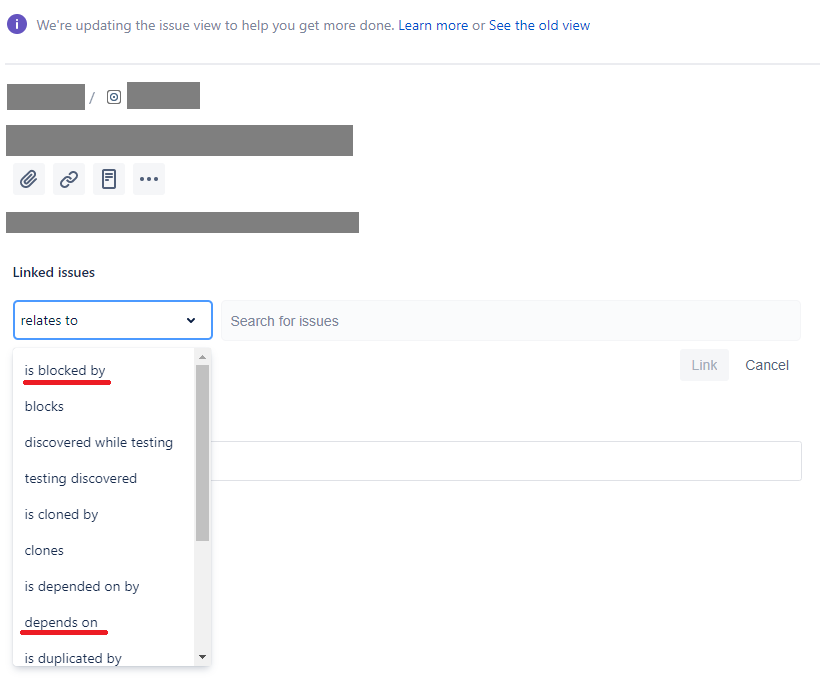 What is the difference? Does "is blocked by" imply some stronger kind of dependency? Or are meanings of these items just project-dependent (i.e. no universal guideline)?

Jira links are broadly used, as far as I can see, for an information-only purpose.

All in all, it boils down to how your team uses it.

With that in mind, it'll strongly depend on what is considered a "dependency" and a "blocker" in your context.

Given the following scenario:

foo is blocked by baz

One way of reading it is as:

Which could be derived into:

I have always looked at them in the following manner: Depends On indicates a relation and order of a task to another, and Blocked By is a task progress status.

Dependencies and blockers are the same thing. The difference in tag typically means whether the event was planned for or not, whether it presents an unusual problem to be solved, whether it is escalated for different sets of eyes and/or hands, and possibly which bucket of dollars is being used to work it.

2
Assign verification person on Jira Board
3
Agile Jira is being bombarded by issues from QA and testers. Need help and suggestions
0
How do you port project and issues from one Jira server to another?
1
Difference between JIRA's internal “Needs Review” and “Review Needed” issues statuses?
3
What is the best workflow between Jira and Confluence?
4
The difference of Jira Epics and Components
2
Jira and Flagged Issues
3
Questions about moving from JIRA to VSTS Agile
1
Separating Jira Kanban board issues into categories?
0
How do you represent issues without Epics in Jira Roadmap (Jira Classic & Next Gen)