Is there any estimation method to estimate end user testing?

Is there any estimation technique that can help us to estimate the number of needed test cases in traditional software projects? For example, we have a Software requirements specification (SRS) with 200 use cases; can I say "we need 200 *10 = 2000 test cases", as a rough estimation?

We need this estimation to write a test plan for the project manager. Sometimes we don't fully understand the application from the SRS because of having spent too little time performing test planning.

There's no single formula for determining how many tests a set of specifications will require. However, you can estimate level-of-effort and set quality targets based on your test plans, provided the people making the estimates are the ones who will be doing the actual work.

The Testing Pyramid and Its Effects on the "Iron Triangle"

There is no universal formula for how many tests you need for each specification. That will vary based on the product, the frameworks that you're using, the complexity of the specifications, and the criticality of each unit of functionality. However, you can get reasonable estimates by asking the actual task performers (e.g. the developers and testers who will be doing the work) to estimate the amount of testing they anticipate for each block of work on the project plan.

In general, you should expect that an agile shop will have many unit tests, and very few manual tests. For example: 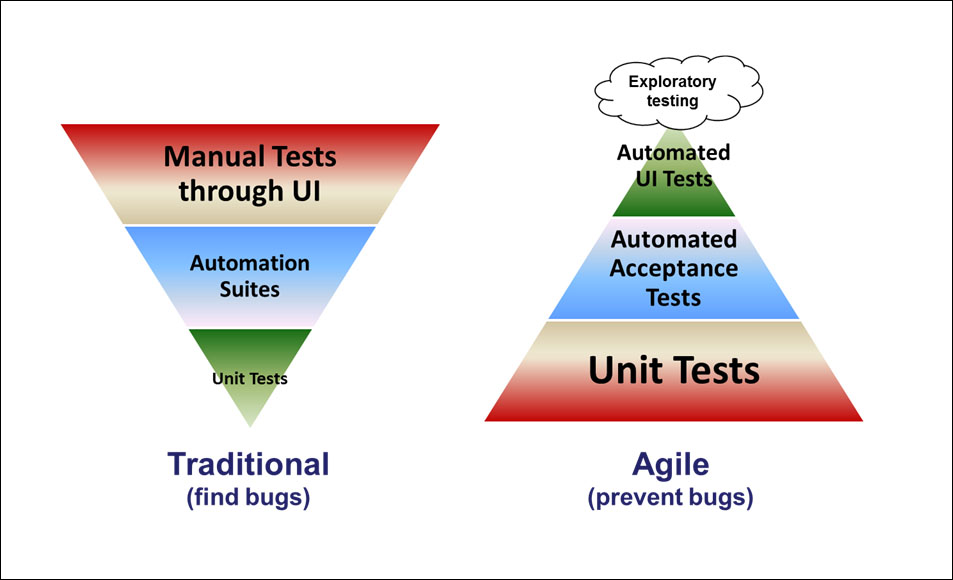 There are many variations of the testing pyramid, and the details of what belongs in each layer can vary based on your product, industry, and process. However, experienced developers and testers who are invited to collaborate with you on the planning and estimation of the project can often provide reasonably-accurate estimates regarding the level of effort involved for each phase or component of testing, and help you make the necessary trade-offs between:

These factors, which are often complementary or opposing sliders, will impact your project's costs, schedule, and quality. It will also have a major impact on your technical debt and defect rates, depending on what the team and organization agree to.

Incorporate Test Metrics into the Definition of Done

Your Definition of Done should always include agreed-upon targets for test coverage. The rest of the testing details are likely to be more of a negotiation and a set of guidelines than a fixed percentage.

Not the answer you're looking for? Browse other questions tagged estimation testing software or ask your own question.

2
Estimation and testing in project management
0
What's the best way of estimating initial software size using '(agile) epics', given a time-to-market but not knowing who the developers will be?
3
What are Our Alternatives to Function Point Analysis for Estimation?
5
Should there be testing-only user stories?
9
Time estimation and deadlines
4
Estimation of non-estimability project
2
How to shift to the semi-automatic estimation of the projects?
2
How to handle large R&D projects using Scrum (or any other agile framework)
3
Team consistently not making sprints