DFD LEVEL -1: source/sinks and data store are allowed to included?

I am trying to develop a DFD level 0 and 1. But as I learned from different sources(eg. textbook, website) that some say data store and sources/sinks are not allowed in the level-1 and the rest of decomposed diagrams, but some say it can be.

Are there any criteria for DFD decomposing development?

It's not that easy to find something useful about it online, I agree. Accordingly to Timothy Arndt and Angela Guercio in Decomposition of data flow diagrams,

Personally I liked the content from Visual Paradigm on the matter to know more about DFD. About decomposition, they write

Top-down decomposition, also called leveling, is a technique used to show more detail in lower-level DFDs. Leveling is done by drawing a series of increasingly detailed diagrams until the desired degree of detail is reached.

In other words, when doing leveling the goal is

first displaying the targeted system as a single process, and then showing more detail until all processes are functional primitives.

When you ask in your question

some say data store and sources/sinks are not allowed in the level-1 and the rest of decomposed diagrams, but some say it can be

what i extract from that article in Visual Paradigm is that in a context diagram you don't want any data source but in a Level 1 it's fine (there's even one example of it there - see next image). 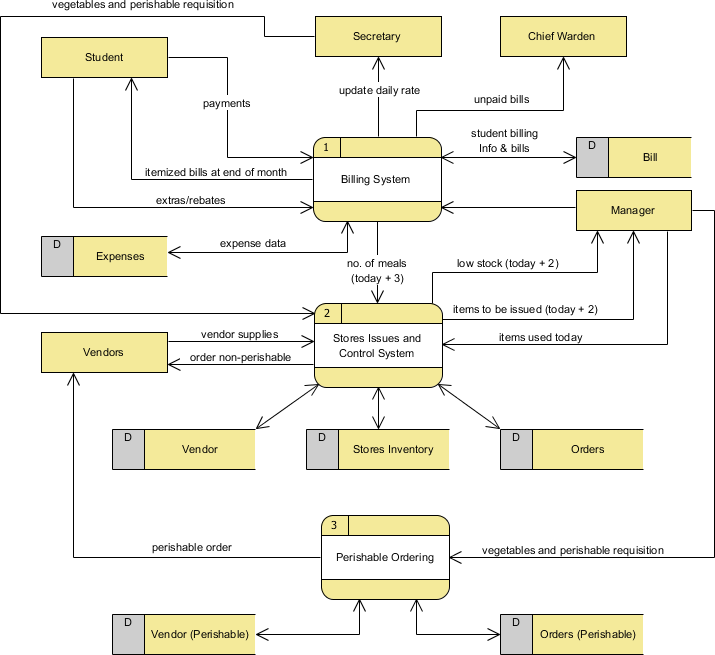 In fact, there's some considerations / criteria to have for DFD leveling: unique names for levels, no cross line, numbering convention, ...

I suggest you to have a look as well at this article from Visual Paradigm which explains DFD by using a food ordering system as an example.

Not the answer you're looking for? Browse other questions tagged software-development or ask your own question.

5
How can I ensure our project gets developed successfully, without having any project management experience?
5
Techniques on showing management how much effort it takes for quality software development?
4
How to transition from programmer to project manager?
5
What are Acceptable SLoC Rates?
1
How should I go about a small team web app development for university course?
4
Example epics for an mobile game
6
Where do requirements end and design begin?
3
How to motivate high performers in team?
1
How to use the catalog of Pattern Languages of Programs (a.k.a. Scrum PLoP)?