How can I map stakeholders without offending anyone?

I want to map the stakeholders on a project to help form a communication plan.

The typical power vs. interest matrix (below) is very helpful, but I fear I can't store it in a document others may read.

I suspect people would be offended to see themselves in the low power boxes, or they might see how they compare to other colleagues and feel insulted. 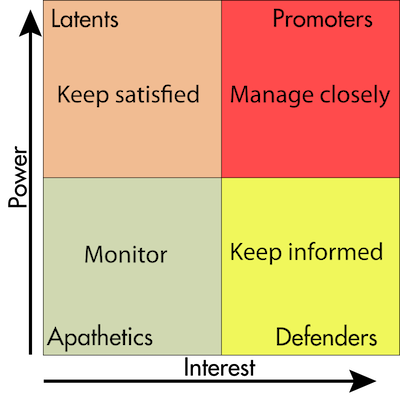 Can anyone suggest a type of stakeholder map, or a rewording of the terms used above, so it won't offend people?

Or must I assume this is always private information for the project manager?

compare to other colleagues and feel insulted.

The other two answers are good - but this confuses me. When I've done stakeholder analysis, the process has been open and participatory. There shouldn't be any value judgement. Power and influence are closely related to budget and participation. If a given stakeholder feels that the graph shows them as less powerful or less influential, that is an opportunity to discuss their involvement. If they want to be perceived as more powerful, I'd welcome their budgetary contributions. If they want to be more influential, I'd be happy to forward the invitation to the Integrated Project Team.

But the whole point of doing stakeholder mapping is to escalate these conflicts and make them transparent. If there are two stakeholders who are trying to control the direction of the project, then you want to identify that and resolve that conflict early. Better to have that conversation before they start spiking one another's participation in the configuration control board.

Projects thrive when they have clear vision shared by all participants. Part of establishing that vision is communication.

Sometimes (unfortunately) communication involves telling stakeholder X that Stakeholder Y has more control of this project - that budgetary or business reasons mandate that the project will address stakeholder Y's interests. In such a condition, I'd do my best to identify the lowest common denominator, but give stakeholder X the opportunity to solve the problem their own way (with their own project). I would hope that someone senior in the enterprise would deconflict the divergent interests, but I will serve my stakeholders.

Like I said, the other two answers are good -but I wanted to provide an alternative perspective.

@DavidEspina has managed to express everything I said above in a more pithy quote:

Transparency would be my go to all the way up until I can't.

I suggest less emotionally laden labels for the boxes; I don't mind being invited to monitor a project, but I think being labelled as an "Apathetic" is likely to generate unwelcome management attention. There are multiple variations of this graph - here is one I found that I think might generate less bruised egos 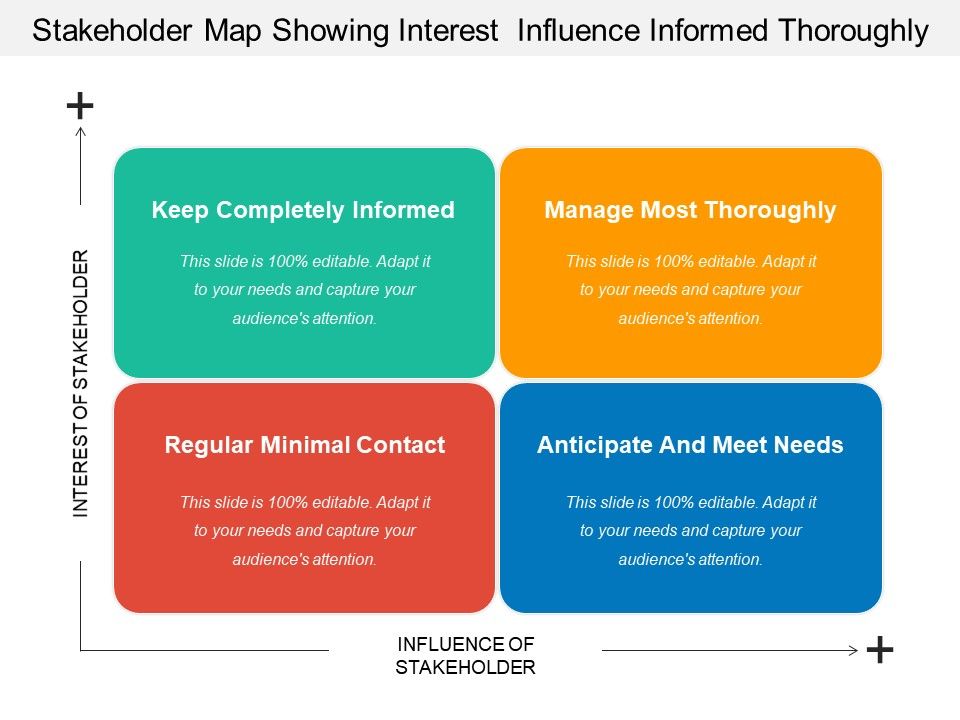 I personally don’t like tools you have to hide. This leads to mistrust and if it leaks (for whatever reason) you are in trouble.

So we started 20 years ago to use a technique which is called project environment analysis (AKA extended stakeholder analysis). The tool is simple and efficient and is part of the open accessible project handbook and is also used as basis for the communication and marketing plan.

The first part is a simple graphic where:

Until now there is no connotation about how positive or negative this is/could be.
Below is a table where those three dimensions per environment are described AND interpreted by the project team.
We use even symbols in the graphic to identify "large positive or negative expectations" towards an environment.
These relationships change of course in the time the project is running. Environments get added or removed and the table is also reviewed during a project controlling session.

I believe in open communication when it comes to relationship management.
Small personal episode: As the responsible programme manager on the business side, the CTO (of a 20,000+ employee company) called me to his office showing me the environment graphic (somebody from IT had "illegally" copied from our project server - although you could openly access it via the intranet - always have a revision control in place to find out such things). He was astonished to see himself marked with a flash (highly negative impact). So we started talking about why and how the team assessed this and guess what - at the end of the project he had a smiley on his entity, because a good and trusting relationship has been built during the next 10 months.

In company environments never assume something can be kept secret, especially if more than one person (sic!) is involved. So if you do it, it should do no harm if going public.

Here a schematic for the community (simplified and fictious) 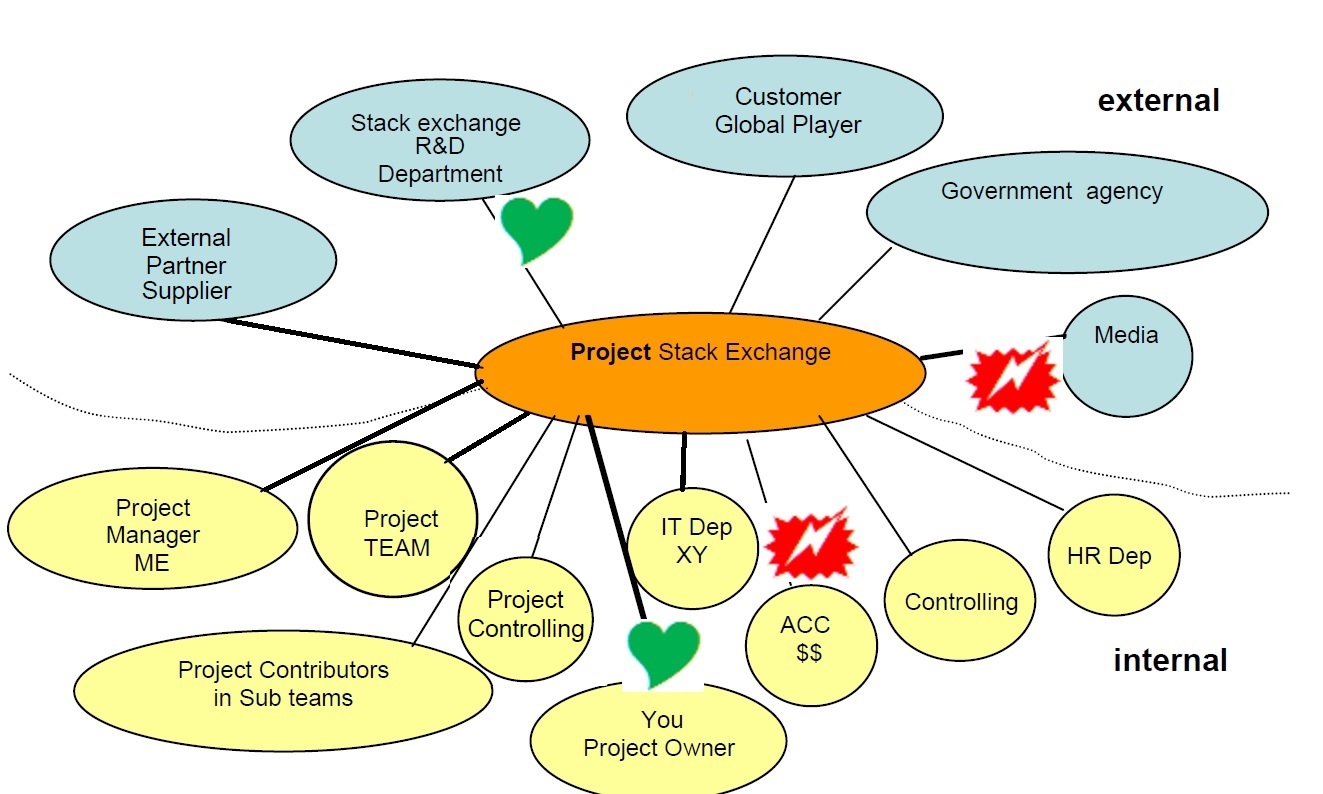 It's best to avoid using group titles like defenders and apathetics. The map in ProjectManagementBlueprint conveys the same stakeholder analysis but without the labels. It also uses the phrase engage and consult instead manage closely.

Honestly, Duncan, I think that you should simply present it to everyone and presume that all concerned are "at work right now" and thinking about the project ... not their fragile egos. This four-square diagram is functional and descriptive, and anyone's free to disagree with you -- if they care in the slightest.

Show them this diagram if there is a purpose for you doing so. Such as decision-making between multiple projects. If you decide to use it, use it and be done.

This and other stakeholder analytics need to be tightly controlled and viewed only by those that need to view it. Changing the words can alter the tool's intent and in an unfavorable way. So do it as prescribed and protect it as if your job depends on it.

EDIT: Segmenting stakeholders into one category or another is necessary so you know how to communicate to them, get information from them, get some of them to participate, get others to move out of the way, or whatever other action is necessary. Not only in the grid above, but those segments could be whatever they need to be for your project and some of those segments can be insulting, discouraging, alarming, etc. If you adopt a 100% transparency strategy, you open up a ton of risks that could damage your project or you might be motivated to avoid segmenting some stakeholders in their proper grouping for fear of their reaction. And then your stakeholder analysis becomes a waste of time.

All businesses, operations and projects, maintain secrecy and need to know strategies all the time. This is no different. Sometimes you need to maintain a need to know basis for the sake of the project and there is nothing wrong with it.

You are right to be concerned about how the chart would be perceived by your stakeholders. The best answer, in my opinion, is to not publish it - there's no rule stating every document you produce has to be provided to the project team. This document is meant to be an analytical tool so you, as a project manager, can make decisions on how to handle each of your key stakeholders.

I use this type of matrix as input into my communications plan - not as an end unto itself. Providing this matrix to the stakeholders adds no value to their understanding or management of the project. Again, this is a planning tool; they have no "need to know" how you have evaluated their power and influence. 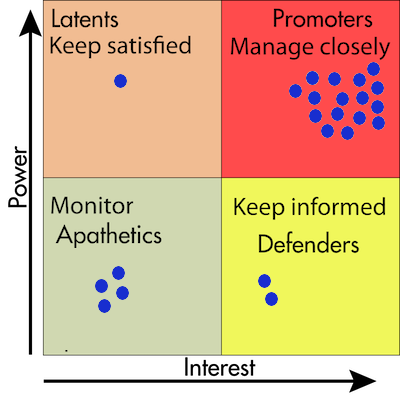 So everybody will win,- project will be defined objectively and nobody will be insulted personally. Or use pie chart composed of 4 sections which would represent number of % from stakeholders in each category.

If you need to implement individual communication plan according to this stakeholder segmentation and you want to document in a project to what group some stakeholder exactly belongs - you need a slightly different approach. Then I would recommend to assign some letters for each group in some pattern,- your stakeholders segmentation scheme (your private info "password"). Something like that : 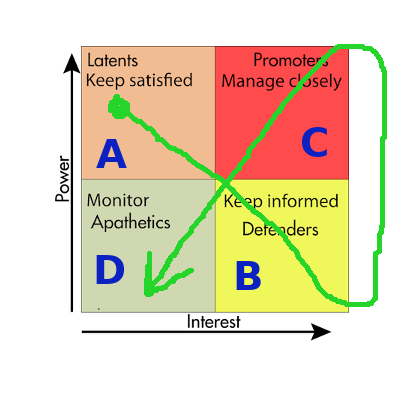 Then in your documentation you can show for each stakeholder that he/she has P/I grade as one of A,B,C or D. What grade means what- will depend solely on your segmentation scheme, which you can add in documentation as a last appendix. If stakeholder is lazy,- he may not go into last pages of documentation. Well, then it's their problem, not yours.

I am quite sure the mapping of shareholders is described in pmi as a private exercise.

The point is not to alienate anyone, just to have clarity for yourself as you manage the project.

This isn't exactly what you are looking for, but I think it will solve your end goal.

SOFT is a system methodology that was made for hospitals that are known for having conflict of interest between e.g. nurses and doctors.

Here is a picture as example:

The swords means there is a true conflict where both parts are right but it has to be understood.

Giving everybody a stick figure etc. is designed to make everybody human.

For more on this, google

Power-interest grade is the process to identify, differentiate among stakeholders and further to make actionable to get desired goal. PM only authorised to this document and should be completely confidential from other project documents.

My priorities are as follows:

During this analysis we can identify the authority, influence and the interest of the particular stakeholder on the project. It's obvious that everyone will focus on their own interest; so it is important to strike a balance between various needs and desires.

Three steps in this Stakeholder analysis: Identifying the stakeholders, Identifying Potential Impact and Assessing their reactions or responses in various situations.

Not the answer you're looking for? Browse other questions tagged communication stakeholders or ask your own question.

5
How to engage new stakeholders into project?
4
How can we improve the situation of a technical team, without a CTO?
17
How to neutralize negative project stakeholders?
4
Can I ask the stakeholders to review my project plan?
2
How can a manager dispel speculation of favoritism among employees?
17
How do you get stakeholders who don't care engaged?
7
Scrum Sprint Review without the stakeholders
1
What can we do without a clear Product Owner or stakeholder on the client's side?
2
How to tell an estimation made by programmers is reasonable or not without technical skills?
4
What can lead to disappointed and angry stakeholders?