Agile Storyboarding for a viability/discover based work

I have a use case where we are following Agile (Scrum) and as part of our delivery we need to do some research work. For example:

These are sequences. but without completing no.1 above, we really cannot proceed for 2-4 and do a release.

In my mind, the agile way would be to treat no. 1 as a different release item since we are releasing the pipe for usage. So, we should be storyboarding on releasing the new pipeline

The work for no. 2-4 above should be classified as a separate product which can still be storyboarded, but they are not fleshed out for release until the pipeline is released.

Are we thinking this in Agile way ?

PFA - I tried to represent how it looks like initially from our PoV. It's a crude representation of things as they are now. 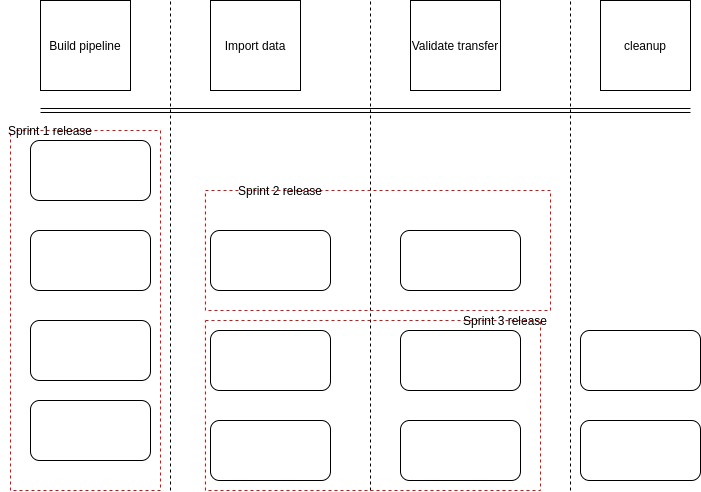 Scrum promotes an iterative, incremental, and adaptive approach to releases. In effect, what you are asking is if you are taking this approach and the answer is probably, possibly, and likely not. I'll explain:

Iterative: By working in sprints, you are working in iterations, which allows you to frequently review your progress and adjust plans as required. I expect you are probably doing this.

It is also worth noting that if you are releasing an increment every 3 sprints, you are still working incrementally. You are violating rules of Scrum though. Scrum would promote smaller increments.

Adaptive: This refers to the ability to effectively pivot as circumstances change. In the most extreme cases, an adaptive approach might require you to throw out your entire backlog based on what you learn in a sprint. More commonly, these adaptations are adding missed features, changing features, identifying new solutions for known problems, etc.

There is one big red flag in your diagram on this. Cleanup is at the end. This suggests that you are locked into delivering the solution in a set way from sprint 1 to sprint x. Of course, that may just be a problem with the diagram. In a more adaptive approach, I'd often see different areas of data and I'd want to build out the pipeline, transfer data, validate it, and cleanup in one sprint. If that's too big, I'd like to take on a smaller data segment. This would let me complete a full increment that left me in a clean state so I could pivot wherever I needed to next sprint.

I think you're overthinking this. Do you want to know what agile is? Agile is two things. First, the Manifesto:

Responding to change over following a plan

And second, the twelve principles.

Therefore, whenever you come across any issue (such as this, but really anything), and want to approach it in an agile way, then you only need to follow these steps:

Because of that second step, getting advice from strangers on the internet should always be taken with a grain of salt.

That being said, here's my take on your issue - got your salt ready?

It doesn't matter. Either approach could be considered 'agile', so just do it in whichever way makes more sense for your team.

The agile approach is to deliver incrementally.

In your example, it would be to:

Ideally the first piece of data will be sourced, imported, validated and cleaned-up in the first sprint. This is likely to be a limited data set (possibly even just one field).

In agile we would call this a thin vertical slice.

The intention is to deliver some value at the earliest possible opportunity. It also helps to de-risk the delivery by tackling every layer early on.

21
How can a team working on research based items work in an Agile project?
17
Is there any pm methodology that works well on large projects?
2
Smaller PBIs cause duplicated QA work in Agile
5
How to deal with clients' resistance to smaller deliveries?
3
Agile: Can Epics be time-based rather than feature-based?
5
Sprint board critique
3
Work agile with a very small team
4
How can I prevent this software outsourcing project from failing?
2
How to scale Agile in IT Service company (not product based)
1
I was asked to accelerate my team's production: Agile, A/B Testing, Workflow & Process