Capability Maturity Model - Stage 2 What does managed maturity characterization mean, and why is it undesireable?

The following upward flowing staircase chart representing the progressive stages starting from stage 1 of the present maturity of an organization's process capability, called CMMI (Capability Maturity Model Integrated). The last word in the acronym (Integrated) is unclear to me, but I can pose another follow on thread to resolve this question.

My question focuses on the orange stage only for now:

What specifically does it mean for a Maturity Capability Level of a Organization's Processes to be considered at a level or stage that is Managed?

If I understand correctly these bold word in the orange box #2 reads that a process is being managed at that stage 2.

But, what does it mean specifically to have processes that characterize organization's maturity as Managed?

Why is that not enough by itself? Why is it considered an undesirable state?

What is being managed, what entity specifically is managing it? Is this usually a human observer, or a automated computer system, or something combining the two? 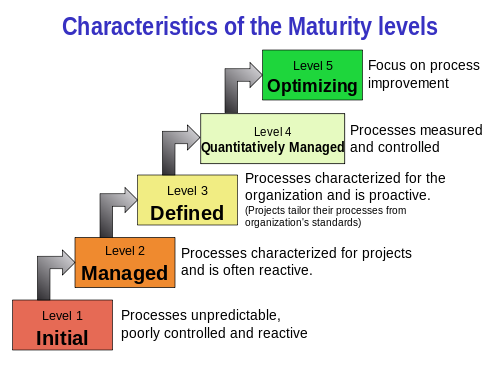 The names "Managed", "Defined", "Quantitatively Managed", and "Optimizing" are the names that the authors of the CMMI chose to represent their levels. They do invoke some meaning behind the intent. An organization at level 2 is capable of managing their projects and processes, but they don't have a full set of defined processes across the key areas. The later levels focus on using quantitative measures of their process and ways to optimize their processes.

If an organization has achieved a maturity level of Managed, it means that they have successfully documented and can demonstrate a number of processes. There are multiple flavors of CMMI (Acquisition, Development, and Services). For a Development organization, it means defining processes in Project Monitoring and Control, Project Planning, Requirements Management, Configuration Management, Measurement and Analysis, Process and Product Quality Assurance, and Supplier Agreement Management. If they have been appraised at this level, an appraiser has reviewed their documented processes and what the organization actually does and there is alignment.

When CMMI was more popular, CMMI Level 3, or Defined, was often a target. At one point in time, being appraised at CMMI Level 3 was a consideration for receiving US federal government contracts of a certain size. Some studies have also indicated that the biggest "bang for the buck" in terms of balancing process control with real-world outcomes came at CMMI Level 3, and the cost of fully implementing the controls at Level 4 and Level 5 was burdensome.

Not the answer you're looking for? Browse other questions tagged cmmi or ask your own question.

6
Can someone please explain when Capability Maturity Model is used when analyzing data structures?