Bugs in Sprint, which backlog

I am trying to decide how to deal with bugs found in sprint in the context of a team and a program backlog.

I have come up with the below process for deciding what to do with a bug and would really appreciate someone confirming or challenging my understanding of the process, specifically when a bug is raised in the program backlog as opposed to the team backlog. 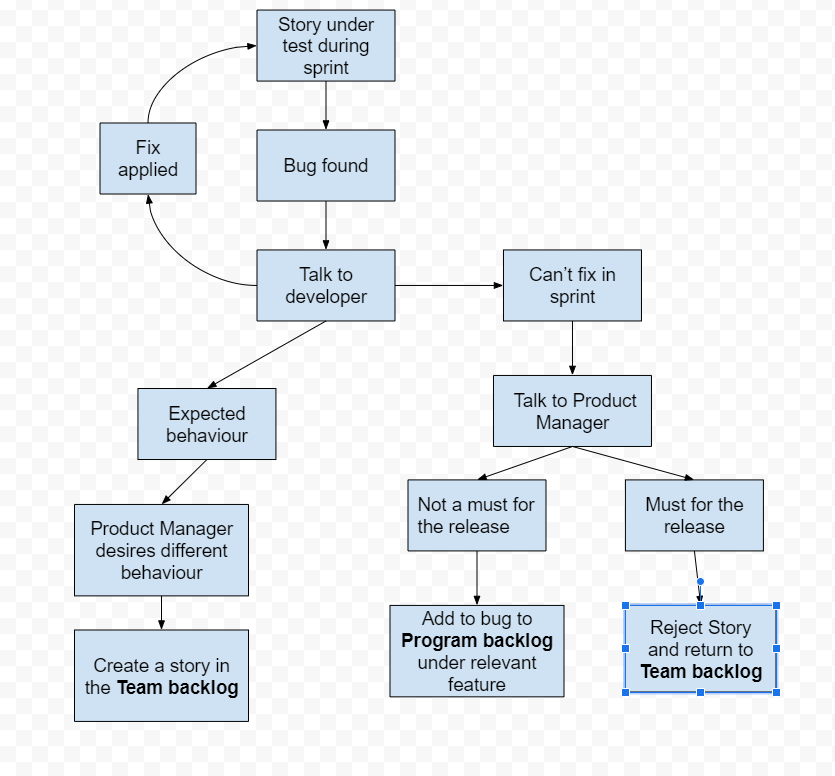 I'm not entirely clear on the relationship between "Sprint", "release", "team backlog" and "program backlog" in your case, so I'll need to keep my answer more general, but it should still be helpful.

This shows a bigger problem. Why is there a delay between finding the bug and talking to the Developers and the Product Manager? Getting everyone together earlier can reduce steps in deciding if the issue found is a bug or a misunderstanding of expected behavior, and if it is a bug, figuring out the impact and priority for fixing it. If it needs to be fixed in the current iteration or release, that may require removing other work, so getting the right people together to have that discussion earlier can reduce the steps in your workflow.

I find the most effective question to ask is what the risk of shipping with the current behavior is. Ideally, all found defects would be fixed before they are released. However, we don't live in an ideal world and need to balance getting feedback on a change or set of changes with introducing potential defects. Only the people closest to the work and the stakeholders can carry out this risk assessment, and the people on the team - the developers, the testers, the product managers - are the right people to do it. The risk assessment can tell you where it goes in priority of all of the other work - the top of the current iteration, closer to the back of the current iteration, or a future iteration.

8
Tool for Managing the Feature Development Process
11
How to improve and facilitate prioritization of bug fixes?
2
Title/subject formalism in bug reports (standardising bug naming only): I was <context>, I did <action>, I got <actual behaviour>
3
How to Record Bugs Following User Story Completion - in Large Projects
61
Is it sound project management practice to make software engineers fix bugs "off the clock"?
1
Can QA test in-progress tasks? How are bugs reported for incomplete stories?
12
Should bug fixes be deployed as soon as they're ready?
3
PI planning and a manageable backlog