Can separate roles in DSDM Atern be handled by the same person?

The diagram below shows how an Atern team is structure: 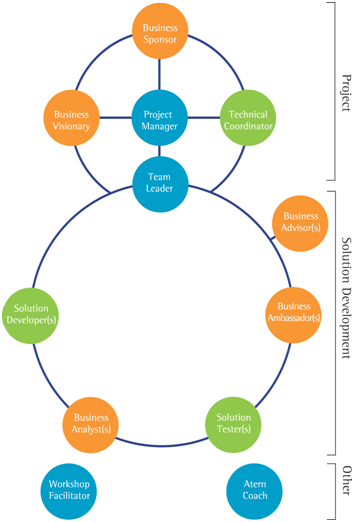 There are many organisations that insist on assigning these roles to two different people. However, in smaller organisations where the resources are limited in all categories -i.e., there is no enough people to fulfil every business role; could the same person be assigned to both roles?

Example 1- you could have several people fulflling Business Advisor role, each with their own area of specialism.

Example 2 - on a small simple project, one person could fulfil the Project Manager and Team Leader role.

We would normally only expect a single Business Visionary (rather than several Visionaries, which could add confusion) - i.e. having one Visionary is "normal", but having more than one could happen in exceptional circumstances

We expect only one Business Sponsor. (I have never ever had a project with more than one Sponsor in 18 years of doing DSDM!!)

I'm not a DSDM expert, but when you don't have enough people on board, you can give multiple roles to a person, until these roles are not in contradiction. For example in Scrum, it is not advised to to be the Scrum Master and the Product Owner all at once.

However, according to this quote, the Analyst has more responsibility than the Ambassador (quoted from the DSDM framework 1.1):

the Business Analyst ensures that the business needs are properly analysed and are correctly reflected in the approach the team adopts in order to generate the envisioned solution.

This means that the Analyst oversees the Ambassador's work as well, so there is a reason why it is not advised to assign these roles to the same person.

What are the risks or limitations of merging these two roles?

You'll use an objective view on the quality of the requirements.

Is there any other way to merge Business Roles to allow people to start working accordingly?

Most probably there is a way, but based on my experience there is always an explanation on why frameworks are as they are now. If you change, you'll face issues you don't foresee. Nevertheless, setting roles shouldn't stop you from starting to work. Again, I'm not a DSDM expert, but maybe the Project Manager can take over some responsibilities from the Analyst...

I've taken a DSDM Atern course and I distinctly remember the instructor saying that you can combine roles. For example, he circled both Solution Developer(s) and Business Analyst(s) and said that this could translate into a traditional Product Manager.

However, I was told there are two roles that are never supposed to be shared: Business Sponsor and Business Visionary.

But in smaller organisaions, it often happens that it is a single (typically senior) person who has both the business vision and the budget. e.g. one person weaing two hats.

Example : In one current organiation I work with, the company (medium size @ 300 people) has an entrepreneurial owner who owns the company outright and also has a strong vision of where he wants it to go. So on some projects he IS both Visionary and Sponsor. He can hardly have a conflict of interest aganist himself :-)

Not the answer you're looking for? Browse other questions tagged agile methodology roles dsdm or ask your own question.

7
Should the same person do the testing who did the development?
1
how to do product software development?
3
How much detail should the solution design have in Foundations in DSDM?
2
Which role among these are suitable for "Administrator" in Agile Software Development Projects?
1
DSDM Atern or DSDM?
5
Can one person be both Scrum Master and Architect at the same time?
0
Which role is the equivalent to the Product Owner in DSDM AgilePM?
3
Can two different roles be responsible for the same task in RACI matrix?
2
How can a small team of devs maintain many products at the same time?
3
Who are Developers in Scrum Team?