Interface building and background programming in a project

Let's say, we have a project with:

The backoffice development takes less then the interface creation. The programmers don't know about the data structure what they will receive from the BO. The features specified depends in 80% on the BO.

What is the best solution?

Did you ever met with this kind of problem? How did you solve it and with success or fail?

I suggest to introduce a bit closer collaboration between the two sites. For example, you can have a week long iteration starting on Mondays. Monday morning the two offices organise a video conference where they decide what they want to do the next week. This is some kind of a work break down, which should follow the idea of "vertical slicing with a bit of shifting": 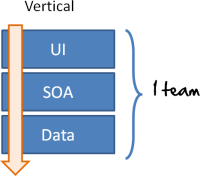 The vertical slicing means that a portion of work contains one small piece from each layer: UI, SOA, and Data. The diagram above presents the idea for a single team, but you have at least two teams - front office and back office you need to change it a little bit.

Not the answer you're looking for? Browse other questions tagged process backlog or ask your own question.

1
Process, program and project management
1
Input on new project management system feature, exposing to customer
2
Collecting, structuring and prioritizing details
5
How do I improve the development process at our small startup?
0
JIRAS: Project jiras and backlog under project do not match
4
Difference between Project and Process
7
Should I leave building the database for the end?