How to compare and select one project out of two?

It's being rather a tough choice on selecting projects. (Different case from what I had posted before.) Now in the scenario if there is Project A and B. Only one project can be executed and that has to be chosen. Both are given the same resources, costing/budgeting. Project A would generate revenue of 100$, and senior management would be happy. Project B will make 60$, increased productivity for staff and senior management will be happy as well.

Which project should be choosen and how to justify it?

Here is what I came up with and chose Project B, because:

There will be expertise answers out there and mine could have loop holes. Hence please throw some perspective or any guidance/article that could support better justification.

Why You Shouldn't Do What You're Doing

Part of the problem here is that it seems like a project manager is being asked to select and justify a project. This is generally out of scope for the role.

Projects require an executive sponsor, who generally supports a given project for strategic reasons. Those reasons may be earnings, return on investment, efficiency or productivity improvements, or just because it will look good to someone else on Mahogany Row.

The point is, the reason doesn't matter for the purposes of project initiation. The goals of the project may certainly impact scheduling or the selection of project controls, but the decision of which project to pursue belongs at a pay grade above the project manager.

How a Project Manager Can Add Value to Portfolio Selection

If you have opinions about the feasibility or value of a given project, or wish to exert some influence on the strategic decisions of your company, go right ahead and expend a little political capital by sharing what you know with the steering committee or project sponsor. However, I'd personally recommend against playing the Dilbertesque game of trying to quantify a business decision that is fundamentally one of subjective organizational value, and that is firmly outside the project management domain of process control.

The executive sponsor has the responsibility to say "I want to champion this project because..." and then make the case for it. Your job, as a project manager, is to look at the proposed project and provide your professional opinion about the resources required to do it, and whether or not the goal can be met with the resources available to the project.

For the sake of maximum simplicity, let's say you have two projects that will take the same amount of time to complete (3 months) and will deliver the same benefit when they are complete ($10 per month). I'll also assume that you intend to do both projects eventually, assuming nothing more important comes in first.

One way to decide which to start is to look at the cost of delay for each project.

Starting both projects today you have a payoff that looks a bit like this: 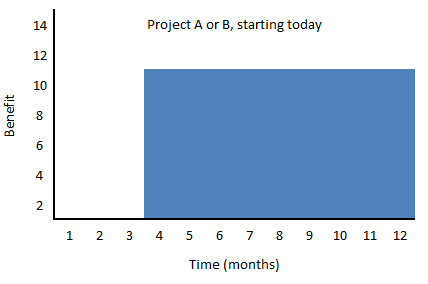 After 3 months of work where you get no benefit for either project, then you start earning your $10 a month.

Try modelling what happens to the payoff for each project if you start it after the other. For example, let's say there is a trade show or a competitor likely to beat us to market in month 5. If we start project A in month 4 (after the completion of Project B) we won't be complete in time for that event causing us to get less back each month for our investment. 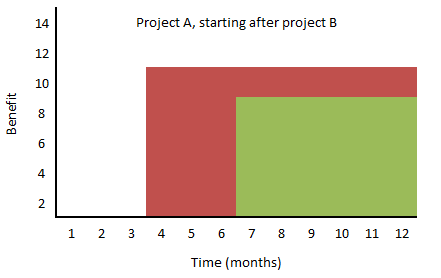 By starting later, a pesky competitor get's their product out first and erodes our monthly benefit to $8 a month, the new expected payoff is the green area. The difference between stating now and starting after project B.

Next look at what happens if we do them the other way around. Project B isn't as time critical as project A - there is no competing product or other event likely to affect the payoff if we do project A first, then do B: 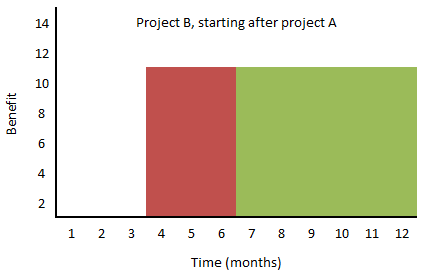 Again, the green area is our new expected payoff and the red area shows the cost of delay for starting after project A.

And I recommend Don Reinertsen/Preson Smith 'Developing products in half the time' for more info.

One approach to making better decisions in such situations is to think of your department or section as a small business. Which Project will you opt to do if you were a small business?

This is why finance people like to make profit centers within larger companies. They treat a section of a company as a separate business and calculate the profits or losses for that section separately - forcing people to think like business owners rather than employees.

I haven't attended this course, but I'll cite it because it seems relevant How to Prioritize Projects When Each One is Critical.

Not the answer you're looking for? Browse other questions tagged estimation portfolio-management or ask your own question.

4
How to determine which project should execute first?

1
Software to help estimate effort and record effort for timeline purposes (one man team)
1
Multiple resources for one task in MS Project
0
How calculate profit margin of a IT project?
1
What are the primary differences when promoted to a Programme Support role out of a Project Support role?
0
How do project management maturity levels relate to the introduction of portfolio management?
4
What methods are there to figure out how adding people to the project will reduce the amount of time needed?
0
How to negotiate a software proposal?
1
How to estimate a Research and Development project?
3
What’s the name for the estimation method where only one team member estimates at a time and others have a veto right?