Not been here for a while but thought I would jump back with an interesting question.

Are optimistic and pessimistic chart lines on a burnup/down genuinely useful or just a project smell imported to an Agile chart?

They are genuinely useful, but there are a few factors that can really skew them to be wary of.

For those not familiar, when we use a burn-up chart to track work toward some scope marker, like a release, on a project, we can take the average velocity and plot a line forecasting when the total amount of work complete will meet expected scope (when it'll be done). 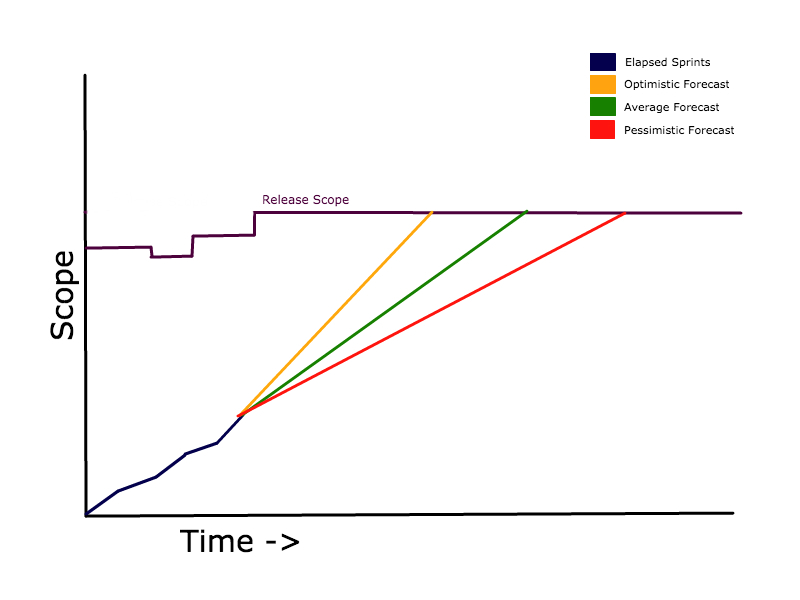 Some Things That Throw Them Off

Predictability: If your team's velocity isn't fairly consistent, your window will be so wide that it'll be useless. Two things to help with this are to use the last few sprints and to throw out understood outliers (like sprints with a week out for Christmas).

Multiple Projects: I've seen teams add stories done for work outside of the project into their burnup, but leave the scope line the same. For obvious reasons, it messes up your chart. Either increase your scope line when you add extra stuff in or don't include it in your burn-up line.

Obviously being able to give the PO and stakeholders some idea of how the overall project is awesome, but there are some other things it's great for too.

Yes/No/Maybe Scope questions: It's easy to plat a particular amount of work or particular feature on this chart and say that it will, will not, or might be done by a certain time.

Prioritization: Let's say something is lower on the backlog and I don't need it done right now, but I need it done before New Years. I can use these lines to know how far up the backlog it needs to be in order to be certain it's done in time without having to throw it to the front.

Optimistic / Pessimistic line shows behaviors (you might say this is just team/project smell): Different trends may mean different things. A large cone of uncertainly (difference between Opt and Pes lines) with the average near the middle suggests that the team has a fairly even number of highs and lows and probably carries a lot of work between sprints. If there's a large cone of uncertainty with the average closer to the Opt line, something is occasionally sabotaging or crashing sprints. Maybe business is changing it's mind mid-sprint or they're being plagued with environment problems. If the reverse is true (average is near Pes line) then the team is occasionally having amazing sprints. The team is probably capable of a lot more, but something slows them down most sprints. You should target those opportunities.

There is a great video that shows how to use variance in trend lines in an agile project. This video is a standard part of my two day Scrum Master training class because Henrik does such an amazing job of giving a total overview of scrum and by doing it from the PO perspective, helps to pull in the most skeptical of students (the product manager).

Not the answer you're looking for? Browse other questions tagged scrum agile burndown-chart or ask your own question.

11
Help with stories in Scrum
1
Is it ok to try do a project “Agile” style before attending a formal Agile training?
2
Project manager in scrum and communicating with the customer
1
Burndown chart which is based on due dates instead of work remaining?
3
Last day of a sprint in burndown chart in TFS2013
4
Opaque burndown charts and story validation
8
Sprint Burndown chart and tasks estimation in time
5
How to handle tasks from previous Sprint on current Sprint Burn down chart
7
User Story versus Task in Jira