In our company, we are moving some teams to scrum. Before scrum, it seems we don't have a lot of visibility into the productivity of the teams, and we don't necessarily have a way to measure the quality of the output the teams produce.

With the teams which have moved to scrum, senior management and the teams who have made the switch see the value. The development teams love the collective ownership and protection from disruptions, and the senior managers love being able to have a platform to have their feedback heard in the sprint review meetings. We have also had "anecdotal evidence" in the form of customers saying things like "Wow! What happened to you all? Did you get funding or something?" in response to the perceived faster development.

So, scrum feels faster. It feels nicer. But unfortunately many people still want to see hard data and don't like fuzzy warm feelings or evidence based on observation alone.

Is there any way to measure productivity against an old system where you previously had little to no data? How does one approach convincing other teams in the organization that there are benefits to using agile methodologies like scrum when there's no hard data?

I worked with one organisation that was in a similar position. They had starting adopting Scrum before measuring the effectiveness of the old way of working.

They did find a few metrics to compare using historical data:

It may not surprise you that, absent of data from past projects, it's hard to show much comparison. You can use some relative estimation on past projects and take two of similar size or similar functionality and compare them.

You specifically mention the fact that it feels faster and sometimes it is, but that can be harder to get exact numbers on. However, you probably have these numbers: compare value/revenue generation of a project in scrum that is using iterative releases with one that has one big release at the end. If you graph it, it probably looks something like this: 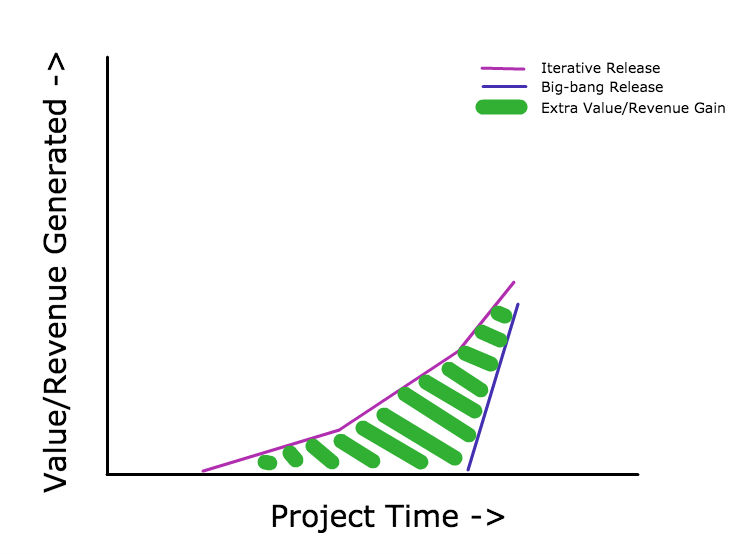 This isn't about Scrum exactly - more about iterative releases or end-of-project releases. It might provide some of that hard data you're looking for though.

Past that, you can also baseline your data right as your team adopts Scrum and then show it improve over time and the team is able to continuously improve. Again, this is more of a promotion for the feedback loops you get in Scrum than Scrum itself, but that's probably ok.

Additional example: I worked on a project once that had 8 tools developed for searching different types of inventory. Each inventory type (50ish total), had its own set of requirements. Under waterfall, my client had 8 tools delivered in roughly 8 years (in a legacy, cold fusion environment). We developed a templating engine in java and built the new tools using Scrum as well as DevOps and built 45 tools in less than 6 months. We used data access standardization techniques such as service-layer API's to be able to predict how data would be stored in the future, which allowed us to essentially write small configuration files for each inventory type - the templating engine did the rest.

In Scrum productivity is measured in terms of actual delivery.

If Scrum is used for Software Development, then software that is valuable to the end users is delivered after each Sprint. An accurate forecast for Sprint Backlog, meeting a Sprint Goal and satisfied Product Owner is enough to measure Productivity.

You can apply objective Software Engineering Measurements, like Function Points, against the software that was developed using other approach and compare it to Function Points delivered in the same amount of time in Scrum.

However, I doubt that this kind of approach would help you convincing Developers to use Scrum.

In moving forward with this, keep in mind you usually "get what you measure". Velocity and quality are good, but not at the expense of other areas - happiness, ownership, autonomy, domain expertise/T-shapeness, skill and knowledge decentralization, sustainability, and so on.

In my experience these often have a far larger impact to actual value delivered, are much harder to measure, and will not be represented in velocity or defect count data.

I really like Barnaby's answer, however I'm not sure if you can do the proper comparison that can convince skeptics and data nerds. The problem is with this particular setup that it is not possible to know why the later projects are doing better (or worse).

In my opinion two factors work here: the old way laid down good fundamentals so the new way just plays along with it and builds on it, or the new way actually managed to reform. I believe there is no way to prove the second factor, until one cannot falsify the first one.

It is a common problem in sports. There are athletes who didn't win anything relevant in their career as young athlete, but when they join the adult competition they start winning. Coaches tend to say that the change did the trick, however in several cases the coaches who worked with them when they were younger laid down all the fundamentals (mostly physical) which was key to start winning.

If you really want to prove anything here, go back to the old way for a couple of sprints / iterations. You have data from your scrum, and you can collect data from you old way of doing business, because now you know what you are looking for. Your case must be reversible; if your test shows that the old way is worst than scrum, you have your results. However, if the results are not definitive, the only thing you can say is that the new way feels better, which is a good, but will never be enough.

Not the answer you're looking for? Browse other questions tagged scrum agile metrics or ask your own question.

1
Current best metrics related to requirements, design and architecture
15
With Scrum, how do you keep from dropping the little things?
4
How to manage sprint velocity when someone does both design & development?
1
How to measure performance of several scrum teams against each other?
2
Digital Sprint management with regards to ISO compliance
7
How to encourage more participation in web scrum meetings?
3
How can these problems with agile be solved?
2
Measuring code productivity between team members
1
How to move towards Scrum when we don't really seem to be able to fit into 'The Scrum Guide'?
6
Scrum Team and Product Owner working against each other