What is the best way to manage features decomposition in scrum?

I am wondering what the best way to implement decomposition is.

For instance let's say we have a feature or an epic that has been in the product backlog for a while, or in the roadmap for that matter. Now it is time to put it into a sprint and hence decomposition becomes necessary. Now, regardless of the tools that is being used (low-tech vs high-tech), how do you guys keep track of the decomposition process? Do you do it at all?

For example, let's say I have a feature in the backlog that reads:

this will be broken down into the following user stories:

ID: 2001 | As a user I want to be informed when I input wrong credentials

ID: 2002 | As a user I want to access my dashboard when login is successful

ID: 2003 | As a user I want to be able to retrieve my lost credentials

And so on and so forth.

I like to think of epics as placeholders that exist temporarily until you are ready to break them down in to user stories.

The Scrum team works on user stories, so this is by far the most significant backlog artefact.

Once the epic has been broken down I see little value in tracking it or even linking it to the user stories. Its job is done.

I have worked in organisations that value tracking epics but it has usually resulted in confusion and some bad working practices.

For example, these organisations may:

The answer is: it depends. The answer will be different for different epics and development organizations.

If there is a stakeholder interested in knowing the status of the epic as a whole (rather than the status of the individual component stories) and if it is not too much effort in keeping that status up-to-date, then it can have a value to keep the epic.

If nobody is interested in the epic as such or if updating it takes an inordinate amount of effort, then you might as well discard it and track only the status of the stories.

You're missing a couple of key concepts:

Tracking epics or themes as first-class data elements assumes that they can be fully-defined up front, and that they have intrinsic value. They can't, and they don't. Epics, themes, and even most "features" are all ephemeral byproducts of agile development, and are only useful in communicating about current or near-term work. Because agile development embraces change and assumes that a product will evolve over time, tracking historical work (or worse, legacy planning artifacts like epics) is generally done for political reasons rather than framework-related ones.

You should actively question the value in tracking in-progress or completed user stories. If you find you must track them, then the team should collaborate with the stakeholders to find the most effective way to do that in your unique context.

In agile frameworks like Scrum, a working product is more important than comprehensive documentation. Living documentation that describes the current feature set is valuable, but tracking historical requirements and deltas from past iterations is a holdover from waterfall-like methodologies. While documentation like legacy backlog data is not entirely irrelevant, it shouldn't become an end unto itself. So, it's worth asking whether this data is useful in helping to produce a working product, or in inspecting the project's processes. If not, don't do it.

In many cases, the reason that teams want to do this in the first place is because stakeholders are really asking:

How much progress are we making towards Feature X or Release Target Y?

If that's the case for your stakeholders, this usually indicates one or more of the following Scrum implementation problems:

In short, your question seems to assume that all work for a given feature can be known ahead of time, and work should be tracked against this "100% complete" status, including specific implementation details. This is entirely contrary to both agile theory and effective Scrum practice, so don't do that.

Each Sprint, the Scrum Team should be providing a coherent increment of work to stakeholders for review. Furthermore, after the first few Sprints, the product should always be in a potentially-releasable state after each Sprint. So, rather than tracking work against a big, upfront design, the Scrum Team and the stakeholders should be asking:

Is the current state of the product good enough to ship?

Part of this conversation may revolve around what's changed since the last time the product was reviewed. That's where the current Sprint Goal, completed features, and epics/themes addressed within the Sprint should be discussed. The goal isn't to evaluate how much remains to be done, though. The objective is to review:

Epics, themes, and stories are useful ways to organize work on Product and Sprint Backlogs, but they are not the measure of progress in Scrum. If the Scrum Team and the stakeholders can't evaluate whether the increment is a successful step towards the project's vision or goal without falling back on non-agile metrics like "percent done," then the cognitive framework the organization is applying to the project lacks the necessary empiricism for successful agile adoption. This should be addressed as a top priority.

I would say that there is no universal method. There are different approaches that you can take the idea from. 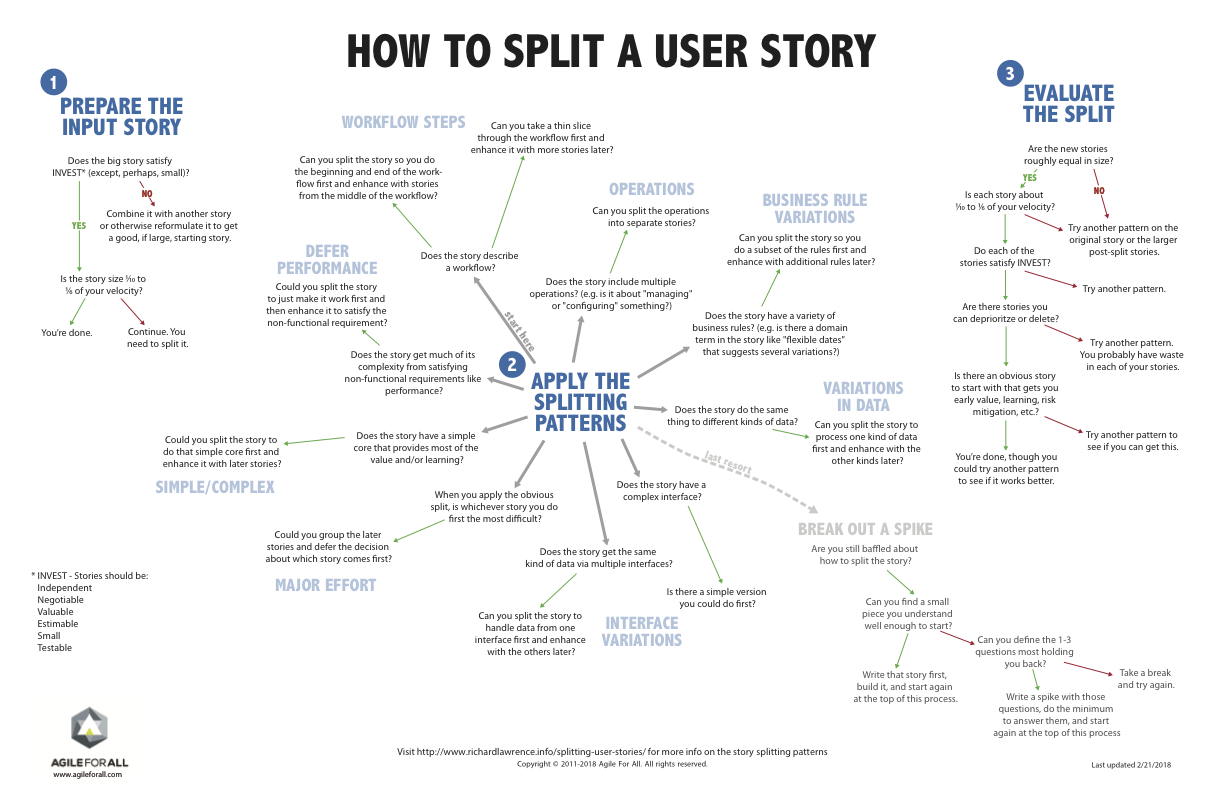 Not the answer you're looking for? Browse other questions tagged scrum agile user-stories or ask your own question.

2
What's the best way to manage business tasks alongside technical tasks?
4
Is it ok to define a user story that has no real business value without another story?
3
Should Scrum meetings be held in one day or two days?
3
Who tests what criteria for epics?
6
Mobile apps: should shared backend resources between iOS and Android have their own backlog and be considered as a separate team?
5
reestimating story size after moving back to product backlog
3
Agile Jira is being bombarded by issues from QA and testers. Need help and suggestions
3
Do user stories mean rework? How much is ok?
3
User story decomposition into frontend and backend
2
How can I effectively differentiate the Sprint Goal from the Sprint Backlog?