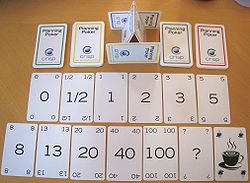 15
Basis of Estimate
18
Estimating when the development team won't estimate
6
Who should estimate user stories?
15
How to use Story Points, if User Stories are completely different?
5
Developer doesn't make deadline
3
How to estimate without relying on SMEs to estimate based on similar projects?
3
How (and in what units) to measure the product scope?
3
Distributed Risk Register and Facilitation of Risk-Based / -Aware Thinking
2
How do you estimate epics?
1
Assessing requirements to estimate costs - what order do we assess the property of a requirement?