I have an issue where using "Priority, Standard" levelling that "Leveling Can Split" appears to stop lower priority tasks from splitting. I am trying to ensure that highest priority tasks are completed first and that resources are fully utilised (where possible). I have a mix of tasks which need to be completed in one go while others can be split up to fill in gaps (so that resources are still working on something that is a reasonable priority)

As shown in the screenshot below:

Any suggestions on how to resolve this would be appreciated. 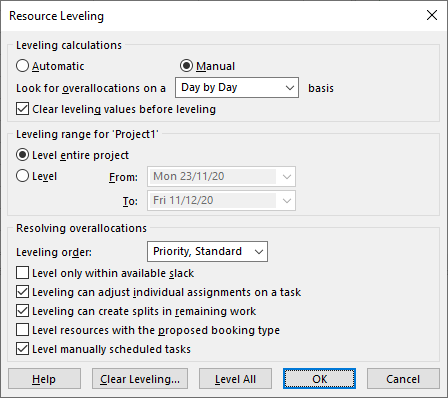 Raise the priority of the task you want to accelerate. That's what it's for.

Not the answer you're looking for? Browse other questions tagged ms-project resource-planning or ask your own question.

1
Is there a way to deny MS Project to split tasks?
5
Level Remaining Resource Units
1
Leveling Doesn't Work on Overallocated Resources in Project 2010
1
Why are tasks split while updating plan?
1
MS Project - Summary Task split by leveling
1
Leveling; getting unexpected results
2
Microsoft Project - manage project with tasks that can be completed in any order
0
Levelling - where tasks are complete, allow other tasks to fill in